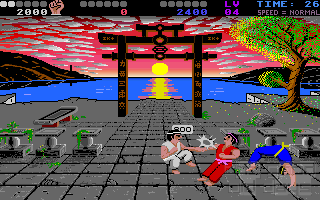 How can one improve International Karate? Hard question. Most changes and additions would just screw the concept up. Everybody knows examples of great first parts of a series which got spoiled completely in the sequel.

Not so with IK+. It keeps the original concept of scoring points by hitting the opponent and getting to the next level through that. It still has all identical fighters. It still has some referee/mentor type guy awarding the points. It still has these incredibly easy controls.

Where is differs from its forefather is the less static gameplay. Instead of pausing the fight each time someone has been hit, it continues. Pretty boring with one of the fighters lying around on the floor, isn't it? Not at all, because there is still another opponent standing!

IK+ throws you into a fight with two other guys. Nobody is 'allied', everyone is fighting for himself. The one who scores best wins the round. The one who scores worst is kicked out. So you don't have to actually win every round to get to the next level which adds to the fairness immensely. Sometimes, it is even smarter to let yourself be thrown down if you're struggling for the second place to end a round.

The two player mode is even more fun now, with the two human players usually ganging up against the sole computer-controlled fighter at first and then fighting amongst themselves for the victory. That way, both humans usually stay in the game longer than in IK+.

The small, but effective changes push IK+ high above its predecessor. It's the best fighting game ever! It's very accessable, it's extremely motivating and it doesn't take itself too seriously. Just try the infamous "t"-move and you'll know...

Bomberman (2004-03-13):
It's quite unbelievable to see all the things you can do in this game, when you only have ONE button. Fantastic game.
The Rumpled Academic (2003-08-16):
This game is one of the most simple fighting games I know of, yet it is also one of the best. You figure it out.
[Reply]