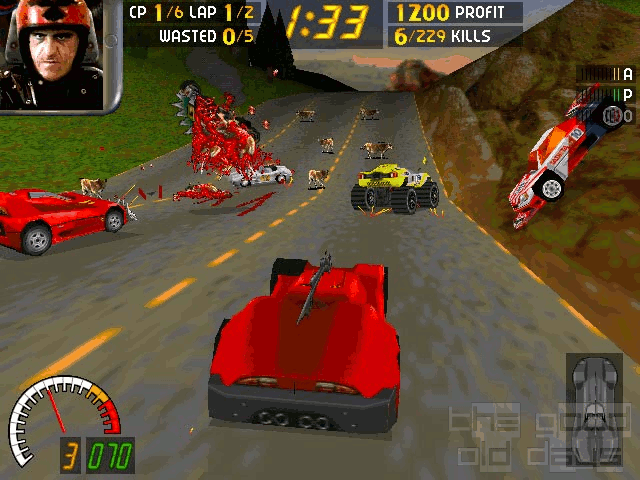 Carmageddon is known worldwide because of its controversial violence and gore, but while most of the games that support their interest in the controversy are usally empty of quality and fun factor, Carmageddon has loads of it, making a great and round game. The idea is insane: running over pedestrians, driving at the limit doing suicide cornering or jumping for hundreds of meters into the ground or from roof to roof, and crashing into your oponnents and law enforcers at maximum speed, all inside a totally open world with complete freedom to explore and experiment.

Not only pedestrians, but also animals, want more controversy?

The game has a complex and realistic physics engine, where all the objects have their own mass and inertia (plastic, steel, stone), surfaces have different coefficient of friction (concrete, oil, snow, ice), and everything behaves as in the real world: crash damage and resulting movement is proportional to speed, size and weight of cars, but also to trajectory and point of impact, in a completely realistic way, not just in five or ten predefined ways as we can see in many other contemporary car battling games.

This physics engine and the freedom of movement create really funny ways of playing, like dropping from a skyscraper with an enemy below, just to smash it when hitting the floor, or driving at max speed to crunch the roof of a police car that is turned 90 degrees against a wall, immobilized. Hits in the air are also spectacular, and if done correctly can make the opponent stay revolving in the air for a good ammount of time. Only limit is your imagination, as this game is a great crashing sandbox.

The environment is also partially destroyable, also with physical properties and sensible to speed and mass: if you have a small car you'll surely be wasted if you crash it to a streetlight, but if you do the same driving a truck at full speed, the lightlamp will be pulled up. Levels are also full of ramps, pits, cliffs, corners and even loops, so we can do whatever we want to surprise and ram our opponents.

Another feature way ahead of its time was non-scripted damage rendering: all cars will deform showing damage from crashes in the exact point it happened and in a way proportional to the force suffered (and armor equipped). Hitting an enemy at full speed and seeing how he has his side crunched, or a wheel moving crazy, making his car unstable when moving, creates a sense of immersion and hunting not seen in many other games. Also white smoke will start to steam when the car is strongly damaged, and when you finally waste an enemy, black smoke and an increasing pool of oil will start to rise around, while the car slowly burns itself carbonized.

And with such a spectacular physics engine and damage rendering systems, developers gave us a candy: in game replay editing, with timeline control and different cammera point of view, from bumper to action-tracking, to catch all the detail of the most complex and funny crashes.

And to round it all, the game also had a multiplayer mode: up to 6 players could play over an IPX local network connection.

Being so ground-breaking in 3D rendering, physics engine, damage rendering, scenario sandboxing, replay editing and destructible environment, there's no doubt it has influenced other later games including Driver and the Grand Theft Auto series.

At the beginning of the game, the player has to choose between two cars: Hawk (yellow) is fast but weak, driven by Die Anna, and Red Eagle (red) is strong but slower, and driven by Max Damage. Through the game, when we waste an enemy, sometimes we will win his car, so we can drive it in further races. Some people talk about having to waste an enemy four times to win his car, but I don't see it so straight-forward. Also only some cars are available to collect (with a surprise at the end of the game).

There are 28 cars in total, ranging from little karts to trucks, including dragsters, 4x4s, dumpsters, sportcars, vans, armored cars or limousines, each one with it's own stability, speed and acceleration, weight, strength, and adorned with all kinds of damaging objects like saws or spikes. Some have even power-ups (I will talk about them later) activated by default, like the annoying Stella Stunna “Electric blue” (you will understand when you see it in action).

In each race there are 5 opponents. A.I. is not dull at all: at the beginning of the race, all cars try to drive as fast as possible, but if you start ramming them, they will go against you, and if you try to escape, they will chase you. Also when they are about to get wasted, they usually hide or run away. Apart from your opponents, huge, armored police cars/trucks are also available for fights and will try to ram you from all sides. 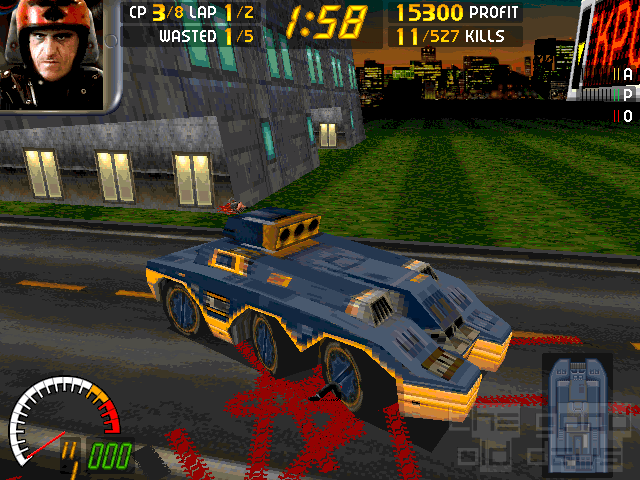 Cops can get really nasty

There's a ranking (similar to the “black list” on Need for Speed: Most Wanted or Death Rally) and we start in the last place (#99), and will start to rise proportionally to the amount of “credits” that we earn in each race. The objective of the game is become number one and win all the races and cars, to earn the big prize. A race is won when you run over all the pedestrians, finish the last lap or time runs out, or waste all the opponents. You earn additional time and credits for killing pedestrians, passing checkpoints and wasting enemies, but also running over bonus (or trap) barrels, killing pedestrians massively or in a brutal or artistic way, crashing into the opponents strongly, doing stunts, driving insanely fast, etc.

Credits not only are taken into account for promotion, but also used to buy updates to the armor (strength), engine (speed and acceleration) and offensive parts (damage) of the car. Also, inside the race, we will be able to fix our car paying credits, with the possibility of entering in losses or recovering our car without limit. There is not way of losing the race other than running out of time. There are three difficulty levels that define the amount of the time and credits earned with our actions, the costs of the repairs or recoveries, and upgrades. 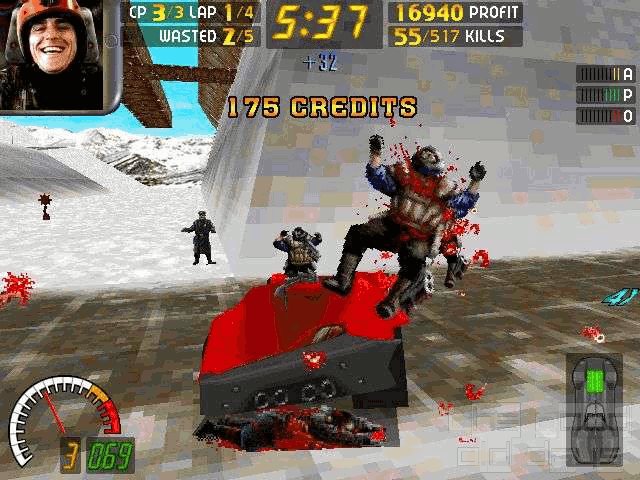 Running into pedestrians will give us credits and extra time

There are 36 races and 5 different environments including city, beach, underground mine, desert, and industral zones. The maps are extremely detailed and varied, with acid pools, beaches full of people, mine fields, prisions, malls, football stadiums, pits, pipes, etc. Playing a stage can easily take us hours, with the limit being our enjoyment of exploration.

There are hundreds of power-ups placed all over the scenarios, with tens of classes. For instance, “solid granite car” gives your car so much mass an inertia that you can pull up streetlamps and big enemies as if they were made of paper. Another shocking one is “electro-bastard ray” which gives your car the ability of electrocuting pedestrians just driving near them.

The game was censored in many countries, replacing pedestrians with zombies (i.e. UK) or robots (Germany). Anyway, the so called “blood patches” which unlocked the full game arose in no time. 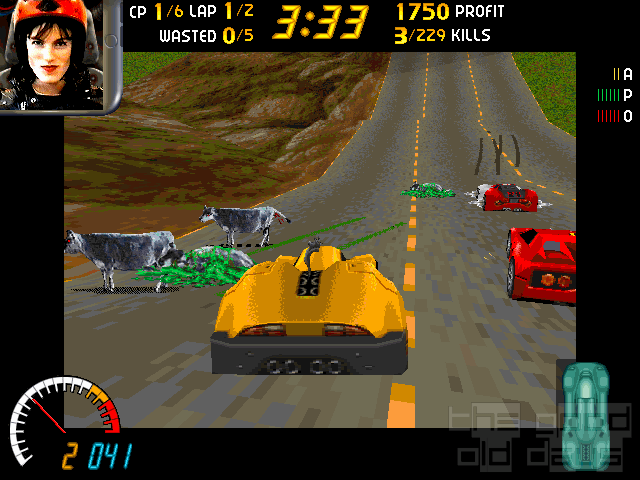 The game had an expansion, called Splat Pack, which is almost a complete game as it has a complete new set of levels, new enemies and powerups, and a more aggressive A.I. Also, it adds 3Dfx hardware acceleration, which gives the game a gorgeous new look.

All in all this is a wonderful game, and aside of the gore details, I hope you discover the wonderful car battling game Carmageddon is.

Moebius:
6/6?.. Really?.. I could never understand what kept people playing this, as i would never enjoy it myself. The physics of the game were abundantly flawed, and the point of the game.. breaking other cars and running random people over?.. Hm, not exactly the best layout ever. By the way, i remember the days when this and Midtown Madness alongside were very popular.. but i seriously can't see why. I can understand why people love GTA, at least it provided them with good scenery (although still bad physics, up to the present day), but.. uh. Nevermind.
Mr Creosote:
Quote:
dropping from a skyscraper with an enemy below, just to smash it when hitting the floor
Right. So much for the hailed "realism" 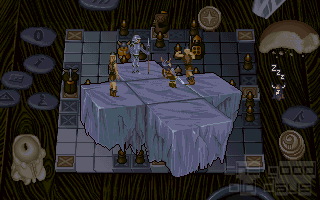