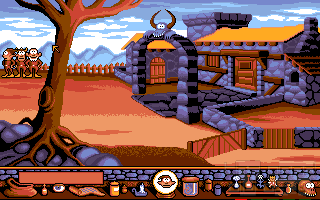 Take the Adventure genre. Strip all story from it. Add different characters with different abilities. Limit the free movement of these characters to one screen at a time. What you get is Gobliiins.

Actually, there is some hint of a story: The king seems to have gone mad suddenly. He's in pain and acting completely unpredictably. Three goblins (hence the title) are sent to find a cure. This only serves as a weak framework for the scenes the player has to complete in linear order.

It gets more interesting when it comes to the characters. First of all, there's a magician who can cast spells on objects and people. Then, there is a warrior who can hit things and climb. Last, but not least, we have the technician who can pick up, carry and use objects lying around on the ground.

On each screen, you have to use the combined abilities of your characters to achieve some goal. Mostly, this is getting to the next screen. Sometimes, it's also collecting a hidden or locked up object. Sometimes, the goal even isn't really clear until you've already achieved it by random actions.

Solving these puzzles is really fun, though. They're logically constructed (well... the logic of a world inhabited by goblins and magicians at least) and not overly hard to solve with some thinking and trying. Trying out things is an important factor for the fun anyway, because even many 'wrong' actions will result in funny animations.

Unfortunately, there is one thing which is hindering the careless trial and error method: Your 'party' has a collective energy bar which decreases when you do some stupid things (like for example going too near to a giant spider). Some cases which make you lose energy aren't really obvious, though. At least not until you've tried them out. The game is obviously undecided on the point whether to let people just play around and experiment or not.

Gobliiins is a very nice game. Presentation, contents and difficulty make it suitable for children, too. It's lacking a real spark to make it a really timeless classic, though. 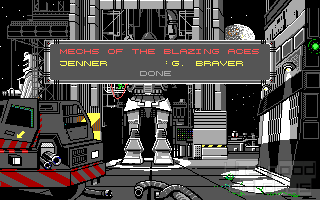