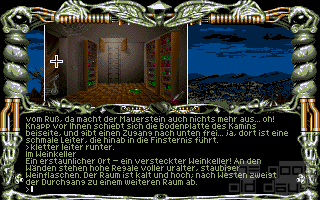 The development team Weltenschmiede made three text adventures, of which Hexuma is the final one. As that, it has got one major problem: The novelty of a decent German language which had carried Das Stundenglas had worn off when this one came out two years later. So it had to be judged entirely by its raw gameplay and writing qualities, in a time when a text adventure was already widely regarded as an anachronism.

What certainly did not help was that Hexuma showed hardly any innovation. The haunted house motifs which the game starts out with cannot hide the fact that the gem splinters which the player is supposed to find fulfil the same function as the gold coins in Das Stundenglas and that the different worlds which the house turns out to be a portal to are not all that different from the different centuries visited in Die Kathedrale. Although the paint coating which is the plot might have become a bit thicker, at its heart, Hexuma is still a treasure hunt in which the player's progress is heavily regulated by locked doors.

Even the tone of the game is still strongly embedded in the tradition of the 1980s. While the subject matter itself is rather grim, the parser communicates in a light-hearted voice. The puzzles paint a similar picture: Well-defined, logical and sometimes really imaginative, but very roundabout and fussy compared to what would be necessary in a real situation. Most of these are rather neutral observations: This style certainly has its fans.

What is less easily forgiven is that several design weaknesses known since the first game still exist unchanged. The parser, although basically good and visibly improved, can still get unreasonably picky in some situations (for example when it insists on “the door to the bedroom” instead of “the bedroom door”). What is probably most disappointing is that there is still not one scenery image per location, but that some pictures are reused for more than one room. These illustrations have even become rather small, only a fraction of the overall screen estate is actually used.

Make no mistake: Hexuma is yet another very entertaining game! Not just the minor issues, also the major positive aspects are still there and they still shine. It's just not the kind of game one would have expected to be released in 1992. Though looking at Weltenschmiede's subsequent release, Die Höhlenwelt-Saga, we should probably be glad that they didn't start moving away from their solid basis to experiment earlier… 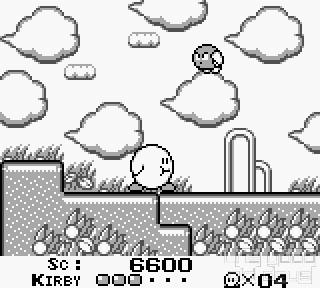