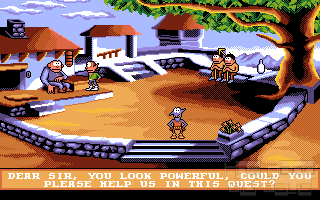 The king may have been saved, but now, his son has been kidnapped. The evil Demon King wants to make the prince into his court jester. What an offense! Instead of the terrific trio of the first part, a gruesome twosome (see number of 'i's in the title) is sent: Fingus, the diplomat, and Winkle, the practical joker.

The only little difference is already perfectly described by the tiny characterizations taken from the box. Fingus is smarter. That makes him more likely to convince people to help, more likely to understand mechanisms of machines and so on and so on. Winkle, on the other hand, is always up to taking impossible risks, annoying people etc.

Balancing out this loss of complexity is the fact that one 'level' is now usually larger than one single screen. In general, the game is still split into linear levels, though. Puzzles involve more items, the inventory grows quickly - way more Adventure-like than the player expects from this series. Many puzzles, however, are purely based on timing. Exact and quick clicking replaces brainwork. A bit of a pity.

There's more (good) slapstick and graphics are a little better than in the first part, too. The 'flattened' gameplay (which is still good, just.... inferior in comparison) is unfortunately too noticable, especially since the player even gets not-so-subtle hints like "we have to get those men laughing" all the time. Not a game to last forever, but still a distraction to waste a few hours with.