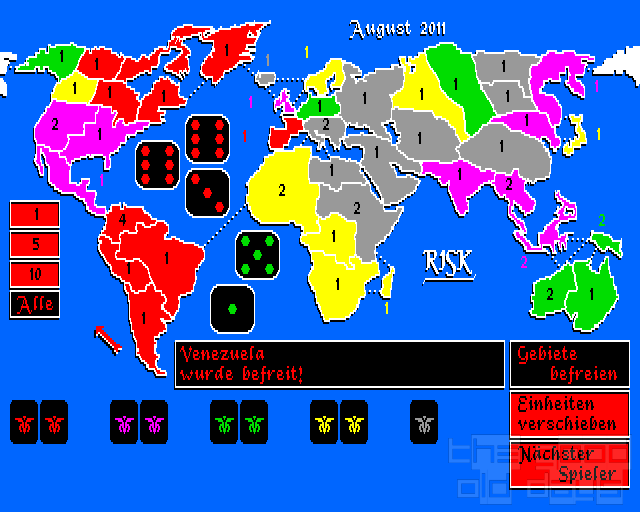 Back in the 80s, today's concept of 'freeware' (i.e. 'free of charge, but with strings attached') was still completely unknown. Instead, we had 'PD' (Public Domain); maybe not in the numbers of 'freeware' today, but the amount of usable, fun free games wasn't actually lower. What was especially popular with both the developers and players was well-known, established game concepts. So let's have a look at this particular Risk variant.

There is nothing to complain about concerning the functional graphics and the comfortable mouse-driven interface. To attack a territory, for example, you just click on it and then select the amount of armies you want to send there from your adjacent territories. Another click on the target country and the dice will be thrown for the first round of the battle. Either you carry on until one of the armies has been wiped out completely or you reconsider and retreat. The interface also allows to activate an automatic battle which is automatically fought until the bitter end for one of the sides.

Risk mainly gathers points with small details such as this. Being able to retreat from a battle is not the only thing: You can also launch an attack from more than one territory at once, in a flash of realism, you can't move an army more than once per round in the movement phase, and many details in the rules can be customised: How many players should participate, how strong do you want the artificial intelligence to be, should there be missions, should the cards be visible, how many armies should the cards be worth and how many sides should the dice have?

Maybe all of this doesn't sound like a lot, but with a simple game like Risk, it is such little details which make the difference between starting over after a successful game or not. This is what makes this conversion so successful that it basically makes all commercial variants useless. Anybody who believes he should charge for his version when there are free ones like this around better have a very convincing story to tell...

Technical concerns: The game has to be launched from Workbench. There is a short readme file on the disk which explains how to launch the English version. Before that, you have to set two assigns: “RISK:” has to be pointed to the Risk drawer of the disk (e.g. DF1:Risk) and “FONTS:” has to be assigned to the Fonts drawer (e.g. DF1:Risk/Fonts). 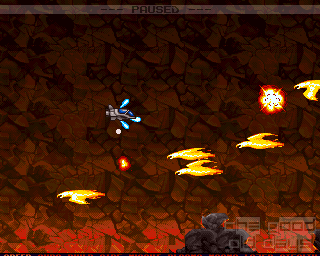