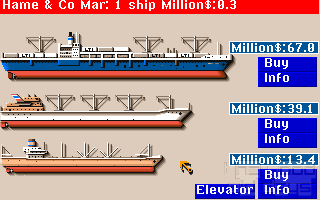 It is the year 1987... the year of a game by Sparks and Beethoven, aka Martin Ulrich and Rolf-Dieter Klein, which became a cult classic almost immediately. I have to confess I cannot evaluate the game in an objective way, because I was immediately spellbound.

Ports of Call is a trading and economy simulation from the beginnings of this genre which, for its time, was able to glue its players to the screen. The game was published in German, English and French and the game's basics are quite straightforward. After founding your company, you buy some halways decent ship (on credit). With this, you then run goods of all kinds across the seven seas until you've earned enough to pay for a better ship. Hopefully the start of your fleet increasing in size.

At the 'ship broker', you can select between seven different ships and three different ship classes. Provided your wallet is deep enough, of course. After ordering a ship, you have to wait a couple of days before it can be loaded in the home port. The prices of ships are in permanent fluctuation. It might happen that a good ship will be available for much less money tomorrow. That is why it is worth visiting the ship merchant as often as possible, especially if you are a little short on cash.

What has to be mentioned in addition is that the game contains some additional sequences. For example, you have to avoid icebergs and other ships or even save people from drowning from time to time. The most famous one is the tricky arrival at (or departure from) a harbour in which you have to control your ship manually. Usually, you can pay a towboat to handle that for you, but beware of strikes – then, you have to do it yourself.

Even piracy and smuggling has been taken into account in this game. Pirates only ever appear on the African coast, though. Smuggling offers arrive from time to time. This can earn you a lot of money, but if it fails, it will cost appropriately much. Another factor which can cost a lot is neglecting your office. If you don't stop by every now and then (at least every one or two weeks), you have to live with certain people simply helping themselves to the contents of the cash box.

Depending on the route and the port, there are different offers. Electronics and weapons are generally most profitable. The better the quality of your ship (the exact condition plays a significant role!), the higher the financial offers.

Special precautions are necessary for delivery with a specific deadline. Even if you make it in 21 days, you still need at least two or three more days to unload the cargo! So you have add that time to the amount of days it takes your ship to arrive at the port. Otherwise, you have to pay hefty contractual penalties.

Conclusion: Ports of Call does not shine with complex interconnections, but maybe this is exactly its main draw with so many people. After some time, you will have learned exactly which routes and which ports will allow you to make easy money. The graphics are not particularly detailed, but nice to look at. The sound is a little weak, especially since the only sounds can be heard in the lift to the ship merchant and while controlling the ship in the harbour or on the high seas (avoiding dangers). Nevertheless, it is a lot of fun to experience this simulation. Guaranteed fun for hours or even whole nights. I know what I'm talking about... :-)

)
Lachlan:
THIS IS AN EXCELLENT GAME, one of my all time favorites.
Adhoc:
Quote:
'Ports of Call' is an early business simulation classic which especially on the Amiga found lots of fans. You're in control of a fleet of tramp ships which means that you don't actually buy and sell goods yourself but rather look for charters to deliver. 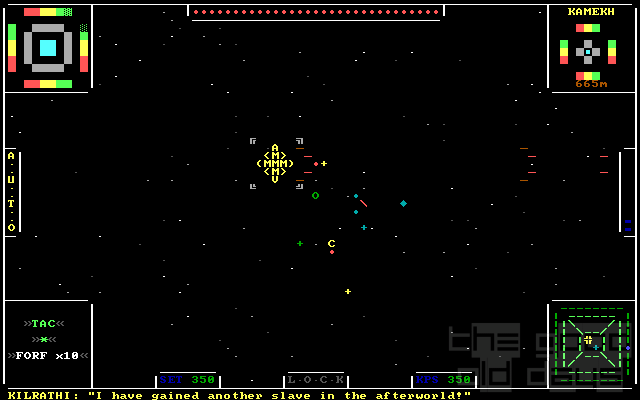