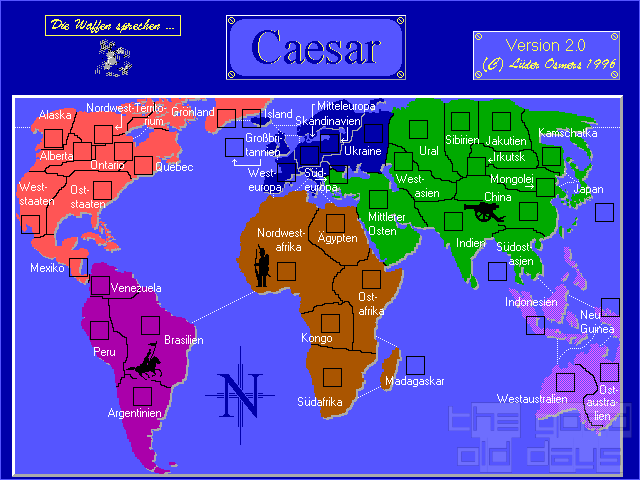 This nice shareware game is not related to Impressions' Caesar, but the board game classic Risk. So you're supposed to conquer the world once again. The secret of the board game's success: It is very simple. Similar board games are just not this intuitive, they cannot be finished in a socially acceptable amount of time. Sometimes, they use scary, non-standard dice. And so on and so forth.

With Risk, there is little you can do wrong. The most important factors and being complete, a good overview and comfortable controls. Caesar does all of this adaequately: Armies are distributed the classic way according to the number of territories under one's control. You get bonus armies for complete continents and in exchange for those cards you get for winning battles. The battles (i.e. throwing the dice) work automatically, but they are transparent. What's especially nice about overview is that you can see with one glance both the ownership and the continent of each territory. The only feature really missing from the original is the missions: The ultimate goal is always to conquer the whole world.

This Risk version takes one risk: Apart from the regular world map, you can also play in Europe. Why is this a risk? The game balance depends on the details of the map. On the world map, Europe is never one of the continents to be conquered early, because it has got so many outer borders and its inner borders are very chaotic.

Of course, this is how the Europe map looks like: All of the tiny countries make for quite a different challenge than the world map. You have to defend many more territories at once. The balance is still there, though, because this is valid for all players: The 'subcontinent' breakdown is very good.

So, in conclusion: experiment successful! The technical implementation is very good, the small expansion works and the computer-controlled enemies are competent enough. Sure, as the only human player, you will usually win, but then, who would want to play Risk on his own all the time anyway?

Mr Creosote:
It is interesting for sure that the game got renamed for the English version. Maybe I'll give the even older Caesar a review some day in order to confuse our visitors even more

Moebius:
Originally posted by Mr Creosote at 23:24 on March 14th, 2018:
Re. the news, I doubt a name which has become such a generic term in our culture such as Caesar can be trademarked. In fact, I have played at least one other game before the one from Impressions which had the same title already.

Mr Creosote:
Re. the news, I doubt a name which has become such a generic term in our culture such as Caesar can be trademarked. In fact, I have played at least one other game before the one from Impressions which had the same title already.
Mr Creosote:
Feel free to share anything about Caesar (1996) here!
[Reply] 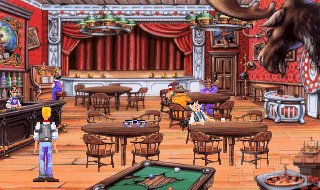