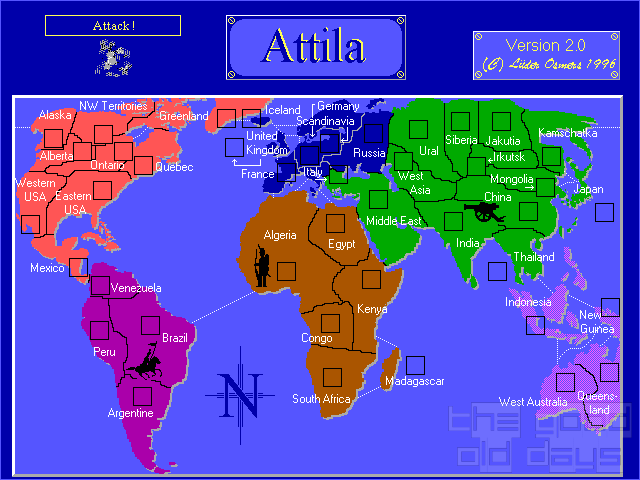 This game is the English version of the video game Caesar. It is a digital representation of the Risk board game: the playing times are a bit long but the dynamics of the game are very clear and simple especially to those who already know Risk.

Suitable for lovers of luck, its value and defect, is a game that you love or hate. The game consists of a board depicting the terrestrial planisphere, divided into 42 areas called territories, which form 6 continents: Asia, Europe, North America, South America, Africa and Oceania.

Unlike the board game, in this video game there are no personal goals to reach. In fact, those who reach first conquer all the territories available, the other players are automatically declared defeated.

Two game modes are available: you can use the whole world as a base map or you can use Europe as a map: in this last case, the European territories are much more clarified than those proposed in the first case.

At the end of the game you will feel really galvanized if you have won (but even if you fought until the end) or frustrated if you are lost (often happen to receive sound cuts hard to forget in the short term - sometimes even in the long), generating, in the latter case, an exciting desire for revenge and replay.

Who has the most refined palate and prefers very reasoned games that need to build strategies in the long run will never appreciate this game, whose strength is precisely the alea. Seeing your own strategies completely demolished by an unlucky roll of dice is the worst thing that can happen to a strategist mind. Who starts a new game, therefore, should not do it thinking of playing chess, but rather dice.

In conclusion: this video game is suitable for lovers of luck, its value and defect, and is a game that you love or hate.

Mr Creosote (2018-03-15):
It is interesting for sure that the game got renamed for the English version. Maybe I'll give the even older Caesar a review some day in order to confuse our visitors even more

Moebius (2018-03-15):
Originally posted by Mr Creosote at 11:24 on March 15th, 2018:
Re. the news, I doubt a name which has become such a generic term in our culture such as Caesar can be trademarked. In fact, I have played at least one other game before the one from Impressions which had the same title already.

Mr Creosote (2018-03-15):
Re. the news, I doubt a name which has become such a generic term in our culture such as Caesar can be trademarked. In fact, I have played at least one other game before the one from Impressions which had the same title already.
[Reply]