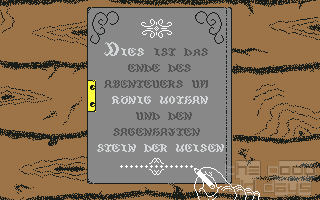 A German text adventure, written by Ralph Stock who later became quite famous for games like Mad TV. Unfortunately, the bibliographic information within the game is highly ambigous and even the oh-so-omniscient Internet does not offer a lot. Nevertheless, somebody has to start documenting such rarities, so let's just start with what we've got – amendments welcome!

Regardless of the year of first commercial release, the gameplay clearly gets us back to the first half of the 1980s. The thin plot (a scientist has been imprisoned by an evil tyrant who wants him to produce gold) is the excuse for a text adventure made in very classic style. The parser is limited to two words (apart from a couple of cases). There is no story development. Characters only exist to trade one object for another. So the game is one big treasure hunt.

'Big' being the key word: Der Stein der Weisen is a comparatively large game with quite a number of locations to explore and use. There are only few pure 'passage' screens – the game has a decent amount of puzzles. However, some of these bend common standards of logic pretty badly (one example can be found on one of the screenshots).

The screen space is well used (location descriptions in the top right corner, parser replies in the centre, parser input on the bottom) and in the top left corner, there is even a small, nicely drawn graphical representation of the current location – sometimes even inclusing some basic animation.

So on the whole, a nice game, but Der Stein der Weisen is hardly groundbreaking. In the late 80s, players could already expect a little more than this – however, as a classic treasure hunt, the game is quite successful. 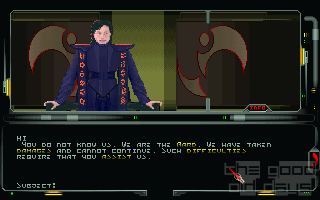