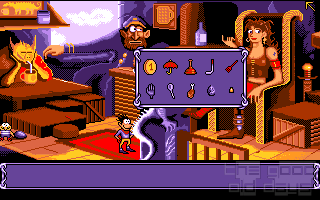 The third installment of Coktel's successful series. Officially, also the last one. Depending on personal definition, Woodruff and The Schnibble of Azimuth could as well be called Goblns 4 (sic!). That however, is another story.

So what is the story here? Good question! Blount, reporter of the "Goblin News", is on the way to interview two hostile kings. There are problems with his flying ship. And the madness starts!

What follows is a series of disjointed scenes which make only little sense if you try to find any logical plot development. This has never been a strong side of the series, though. The puzzles are.

The second part was a bit of a disappointment there. The interaction between the two protagonists wasn't carried out as imaginative as in the first part anymore. Now, there is only one protagonist left. However, the aspect which made Gobliiins successful, the character interaction, still exists, because whenever it is useful, you get help from a little parrot.

That means there are no 'forced' cooperative puzzles anymore. When something can be done by just one person, Blount will take care of it. If help is needed, it's there. This is something the puzzles definitely gain quality from. While not overly genius, and often relying on trial and error, at least the time critical scenes have been reduced to a minimum.

The lack real coherence or continuity in the game makes Goblins 3 a somewhat 'purer' experience again, because the puzzles are everything the game has to offer. These are good enough to make Goblins 3 the 'middle' game of the series concerning quality. It's also obvious the series was in a rut, though. It was probably for the best it wasn't continued anymore - we all know how some seemingly endless series are looked upon quite badly, because the later parts got worse and worse...