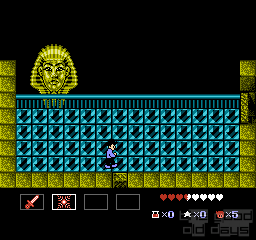 Again on the adventure, after what happened on Startropics you get mixed on some absurd quest for some tetris pieces (whatever they call them, they are tetris pieces), which sends you through time. All this for saving the world or some such.

The story is silly and won't try to hide it. And the game itself, well, you may expect it to be more of the same, repeating the first game. Then you are mostly right, it is. Well, it is. Just that adding a bunch of improvement which makes the original look bad. Actually, this is how the first game should have been done.

And the changes are not so drastic. Well, on a certain way they are, as, after all, adding diagonal movement changes a lot how the game works. Even more when they also removed the tile-based movement. That means this time you can freely move and control your character.

Of course, this affects the game not only because you can now kill with diagonal shots those enemies which love charging you, but also due to now being three dimensional rooms.

Still, the game keeps being a succession of dungeons. Or just holes where you keep falling, some of them with bosses. But also here they made a small overhaul. The bosses are not as repetitive, and dungeons a bit more entertaining, thanks to them being divided in several small dungeons, I would say.

But when talking about these things, the best improvement is how they added a better weapons system, as now you don't get powerups which last only for the dungeon. Instead you get new attacks and upgrades which will last all the game.

Some powerups still exist. But now they are just on the shape of special items, those which on the first game gave you special skills. Well, just healing and revealing enemies it was, but now they add a few more things... or they don't. In the end, they are basically the same, just that instead of revealing ghosts you have to kill, for example, they make some snakes appear, snakes which you must kill to advance.

In the end, this is basically an improved version of the first game. If you have to choose, play this and not the first.