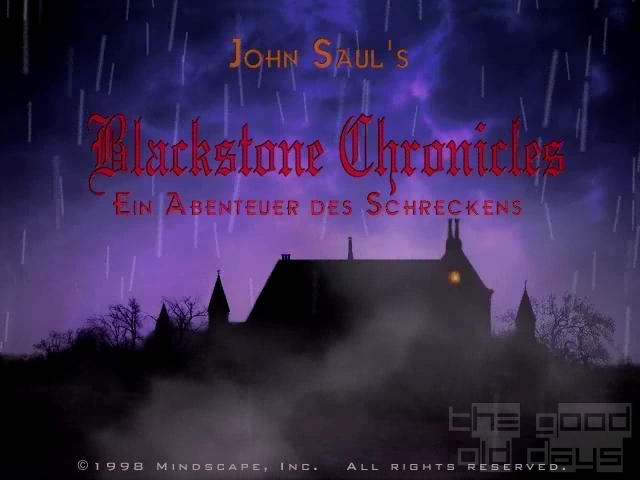 Yet another book gets the Legend treatment: Founder Bob Bates himself attempts to bring the somewhat entertaining Blackstone Chronicles series of short stories to life. Instead of making the original stories into playable episodes, the game's story begins a few years afterwards: Although Oliver Metcalf has fought off the his dead father's influence over him, Malcolm's ghost / spirit is still there. In a devious scheme, he has kidnapped Oliver's wife and child in order to lure Oliver back into the abandoned asylum. Though, as in the written stories, the real question is, of course, whether it's Oliver, the protagonist himself, who is causing all this in his schizophrenic seizures.

Most of the game goes by without any real character interaction. The rooms and corridors of the asylum are all empty, just Malcolm is always there with you, whispering things and reminisceing about the 'good old days' when he was still head of the asylum. And you'll meet some of the souls of the poor former inmates, each telling you their personal story. Very moody and appropriate for such a game – and very classic concerning gameplay:

The game consists of exploring the asylum, slowly learning more and more about what happened there in the past and in which way Malcolm did his work there. Object usage and manipulation, sometimes to get old machinery back to life (resulting in modern Myst style puzzles), does not play a huge part, but nevertheless takes up a significant amount of time.

How does this add up? Even though the game is generall fairly slow paced, there are scenes in which Malcolm once again manages to take control of Oliver's body. Then, the player can only watch as her alter ego suddenly starts doing very, very stupid (and potentially deadly) things - leaving it up to the player to get out of the tight situation this has caused. Ever found yourself sitting in a furnace when you slowly regain control of your senses? Well, it's not a very pleasant experience as you'll learn.

Blackstone Chronicles comes from a time when Legend were experimenting, trying to define a new game engine to replace their (by then) aging previous one. The search began with Mission Critical, but unlike the immediate predecessor Callahan's Crosstime Saloon, this game uses a somewhat free-movement based three-dimensional view which recalls classic RPGs rather than graphical Adventure games (though admittedly it is comparable to the north-south-west-east movement systems of Text Adventures).

The scenes generally look good, but static, and the movement animations have been pre-rendered. The voice actor portraying Malcolm does a very good job and the music is adapting to the current scene well. Those are the game's strong points. Not so much the puzzles – it's a game of mood and storytelling. However, it only works if you give it the time to develop – the beginning might seem a little dry at first. If you're willing to give it the time... recommended! 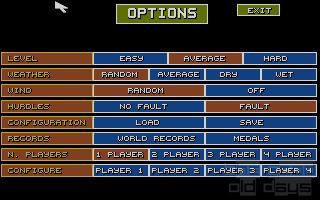