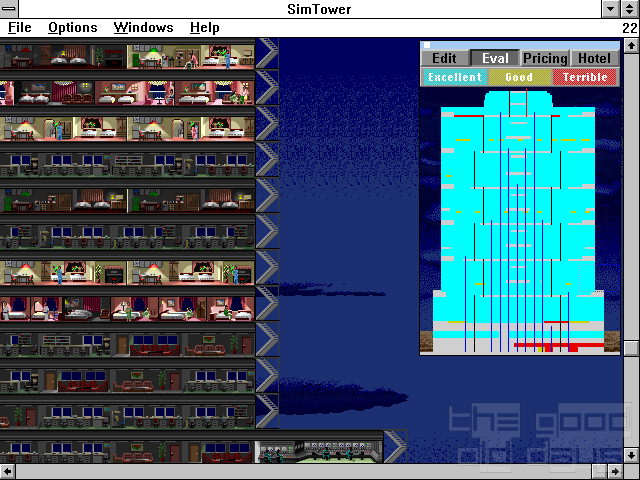 Build and manage all the complex, interconnected operations of a modern skyscraper.

You are the owner and the general manager of your building, which you create from nothing, shaping and sculpting it by adding offices here, coffee shops there, until it's a teeming edifice of commerce and intrigue. The challenges of SimTower grow with each storey you add on: Each of your Simtenants, be they office workers, residents, or shoppers at your stores, has places to go, and their time is not something they waste calmly.

You must design and manage an increasingly complex transportation system that delivers them on time to their destinations or they show you their displeasure by spending their time elsewhere. Your tenants work, go to lunch, get heartburn, and report back about good deals at the shops. Since you cannot advance to the higher levels of attainment in the game - with their accompanying luxury features and higher revenues - without retaining your tenants, it's your business to keep them happy and keep them there.

Of course, there's not merely the challenge of efficient people-moving here; SimTower demands that you consider the psychological balance of your building, as well as its physical balance. Since this is a Maxis game, it's a complex layer cake of possibility.

Every building story in SimTower is a narrative story too: each of your tenants has a stress level, a state of being, that you can individually track. Each of the offices, every restaurant, every condo has its state of being. All of these individual states coalesce into your tower's collective state of being, its body politic; whether that consciousness is favourable or disturbed will provoke the habitation or departure of your tenants. Once they start seeing red - and they will, on-screen - you'll be in the red.

Thus, you must recognise that you need to put that coffee shop near those offices, but perhaps not too noisily near that hotel room, and close enough to that escalator, so that maybe that lift can go over there to accomodate the theatregoers, and did those housekeepers take care of room 765? And multiply those concerns over 100 storeys.

When gameplay begins, options are limited. At the one-star tower rating, the player is restricted to building lobbies, offices, apartments, restaurants and lifts. There's no tutorial, and very little in the way of in-game tips, so it's up to the user to figure which combinations will lead to happy tenants and of course, profit. Condominiums are good for a quick few bucks, but put a noisy coffee shop next to it and the residents will complain. A block of offices on the 5th floor is a great use of space – but no-one will work there if there's no lift access. If you're not careful, you could spend all your money and end up with an empty building, with no chance of recovery. Start small, concentrate on managing foot traffic through the space, and you'll slowly rise to higher floors, higher star ratings, and more options to add to your tower. But beware – with higher ratings comes more fame, and with more fame, more danger!

SimTower is a simple, smart looking game, and while the scope may seem limited, it's a great way to while away a few hours. You might not be able to choose exactly what kind of eateries populate your floors, and the offices may all look the same, but learning the rules and fine-tuning your creations is certainly satisfying. I personally enjoy the sound effects as the day-night cycle goes around, and the occasional burst of background noise from the various establishments as they enter and exit their busy periods. There's no music aside from the intro chord when you boot, but to me it just makes it more atmospheric.

One piece of advice though – watch your resolutions. While this game will run happily on operating systems from early versions of Windows up to the 9x series, computers running the latter have a tendency to run at much higher resolutions than it expects, and being that the game doesn't scale, everything is going to end up looking a bit… small. If you find yourself straining to see what's going on, then hop down a few notches to a lower resolution, and give your eyes a break.