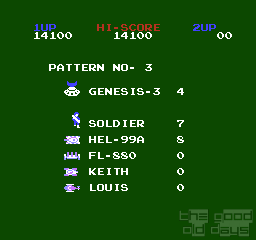 All you need to win a war is lots of reinforcements. And all you need to get those reinforcements is capturing your enemies with the help of your UFO-like ship. At least that's how things work on this game, one of those really simple NES games with a small gimmick to keep them fun.

Actually it's so simplistic that I have already told half of the game. The other half is just calling your troops, at the same time you avoid them from dying or being captured by the enemy ship. All this, as you can expect, to kill the enemy troops until one of the two ends with no reinforcements, as this will quickly end in the death of one of both sides.

This thing about calling troops to help you sounds nice at first. But as it used to happen, it sounds nice until you hit against reality, and also against game design reality. Mostly because calling troops is a bit cumbersome, you have to press both buttons at the same time, and this will call for the troop shown on the corner (lowering in one point the numbers of reinforcements). This makes you stop doing anything for a second, and also isn't too intuitive, but to top that the shown kind of troop changes constantly from one to the next, and you will summon more than once the kind of soldier you don't want.

Not that it takes away from the game, actually that was a bit of nitpicking, as the game shouldn't be seen as more than what it actually is: an action game with a gimmick.

Now that I think about it, I still haven't talked about the gimmick, which is the actual troops you will have at your disposition. Each of them has it's own quirks, like the high mobility of the helicopter, which in exchange only last a short time in the battlefield, until it needs to get back to the base for fuel, and each is better suited for a kind of enemy.

The five kinds of troops are soldiers, light tanks, tanks, cannons and helicopters. And you can at much a total of five troops running around the screen. A bit of help to push back the enemy until you reach your real objective, the base at the other side of the map. A place to capture and then move to the next battlefield.

Kill the enemy, take the base, rinse an repeat. A game you can play in five minutes for a quick break. 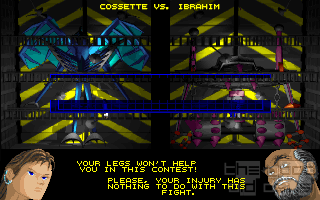