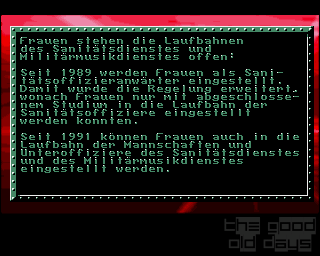 I've always had a soft spot for promotional games. With some ironic distance, they're mostly very funny: unvoluntarily humor galore. The uncoolest companies trying to get their useless products into the concious of young people. That's of course not easily done. Medicine against rheumatism suddenly turns hip, politicians become MTV-compatible stars. Or the promoted product doesn't turn up at all. Hilarious!

In some cases, the borderline is crossed, though. Some cheap plastic toy ist harmless. Political propaganda ist mostly just ridiculous. But selling institutionalized murder as something positive to children? Urgh!

That's exactly what Helicopter Mission is about. It's promotion for the German army which, as commonly known, is 'peacemaker' no. 2 in the world, right after the “US Army”. That, however, is still a relatively new development which started in 1992. In this year, the German army had its first so-called “out of area” mission since the second world war; German soldiers were sent to Somalia (a country nobody remembers anymore). For purely 'humanitarian' reasons, of course.

And that is the specific topic of the game: Fly over pretty landscapes in a Playmobil copter, collect small, helpless and unarmed soldiers, drop small unarmed parachuters and (as alms to the wild bush people) food leftovers.

That's apparantely still not enough! Between the missions, you get a taste of recruitment centers: Weakly upholding the illusion of free choice, you're asked very direct questions which include very direct insinuations towards the 'right' answer. If you choose the 'wrong' option, the one and only truth pops up on the screen and is jammed down your throat.

At the article “why we still need armed forces”, strong-willed people can in a huge effort still suppress their urge to vomit. When it comes to choosing between a male and a female co-pilot, however, it gets really unbearable: Choosing the latter option (which is explicitely offered by the game), a loooooong and pissed text tells you women are of course out, and the incrdily butch skinhead jumps into the seats automatically.

The worst thing about this (concerning the gameplay extremely irrelevant) piece of crap is (in spite of all the other points) still the disgusting played down version of war. Digital murder is questionable enough, but pretending there was war without firing a shot and without harming any human being is even a dangerous propagandist lie!

Nowadays, Helicopter Mission has of course (?) long been overtaken by reality. “Helicopter Mission 2” would most likely be about “surgical strikes” against the “axis of evil” without any “colateral damage”. On the other hand.... “our” “american” “allies” were faster this time - they've already made such a game. Excuse me, I have to vomit again!

That's exactly my point: If you're making a game about an army going to war, don't just show them 'doing good', but let the player do some killing. That's what war consists of, after all, and pretending there is a war without it, is hypocrisy at its best.

And you might have noticed I'm providing this game for download. Guess what: That's so that people can try it for themselves and make up their own minds instead of believing either me or some equally untrustworthy army official.

Aguirre:
Too much hysteria isn't good for your health... you wouldn't care to comment if it were some reds in this game instead of German troops. Your hypocrisy has, actually, convinced me to try this game out, and I'm going to enjoy it.
wrx:
keep your damned political bias away from this site. I just want to play games...you know, those things in which you're SUPPOSED to kill people.
Mr Creosote:
Feel free to share anything about Helicopter Mission (1993) here!
[Reply] 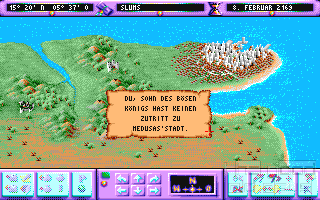