The Wicker Woman
for ZX Spectrum 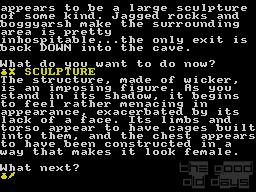 The Wicker Man is “Britain's best horror movie” (according to Empire magazine). Whether this is true is up for discussion. Whether it is the best of anything anyway, but even its status as a horror movie could be disputed. One notable website describes it as “a bloodless musical thriller-cum-travelogue through the Western Isles which was disowned by its makers on release” and ironically calls it a “comedy musical” elsewhere. It spite of, or maybe because of its quirkiness, it has become a cult classic. And now, it inspired this fan-made sort-of-sequel game called The Wicker Woman.

The player takes over the role of Mary, Sergeant Howie's fiancée. Howie has been reported missing; he took a plane to Summerisle to investigate the disappearance of a young girl there, but the villagers claim he never arrived. Mary can't believe this and the player, being familiar with the movie, knows she is right, of course. So the player has got a big advantage over the protagonist's knowledge and uses this to guide her in her quest to solve the mystery.

So you (Mary) meet the smiling villagers, all of whom seem to be from a bit of a different time, but who are outwardly friendly and helpful. Just like Howie did. Or well, almost. Howie, in the movie, spent most of his time talking to people. Mary meets some of the same characters, like Willow, the landlord's daughter and Lord Summerisle himself, but she doesn't interact nearly as much with them. Which is strange, considering she came to the island to investigate... which you would believe should involve asking people about Howie.

However, this is a classic text adventure, so you spend most of your time interacting with the surroundings, not with people. People take over the classic role of roadblocks (“You can't go through here!”) or convenient traders of one object against another. The two exceptions are the two aforementioned ones: Willow and Lord Summerisle take over central roles insofar that they are the 'gatekeepers' of different story branches; how to act around them, what to tell them defines the possible endings.

These endings are varied enough: You can try actually solving the mystery (hardest route), you can even join Summerisle's community, you can die or you can try to get away again with your life intact (but without information about Howie's fate). The world is well constructed: Not too many locations, but enough to allow at least for some exploration. The puzzles are quite nice as well; many are fairly obvious, but some require some original thinking as well.

The atmosphere, as hinted at earlier, could still be improved, though. Not only is the world relatively lifeless (due to the villagers not having much character), it could do with some additional fleshing out. There is hardly anything going on which is not directly related to the solution of the game. Few objects can be found and tinkered with which are not strictly necessary to finish the game. Worst of all, though, the game is still quite buggy – even the mechanics of one central puzzle are broken. Which does not make the game unsolvable, but actually easier, as one very good puzzle becomes more or less optional.

So, for fans, this is a nice snack-sized game which can be finished within a day or two. If you are not familiar with the movie, don't bother – the game does not have an identity of its own. It was never meant to.

Mr Creosote:
Feel free to share anything about The Wicker Woman (2011) here!
[Reply] 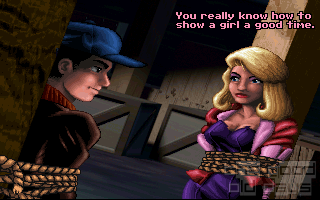