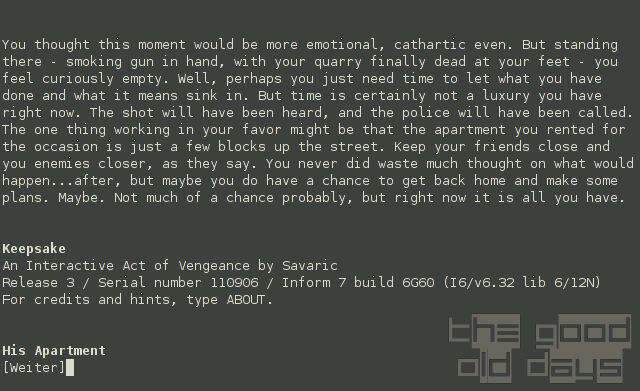 A body is lying at your feet. You've just shot the guy. You may think you've missed the best part of the game, having already committed murder, but fear not – all will be well!

Although it might look like the pressing issue is escaping the scene of crime in time before the police arrive, Keepsake quickly turns into a game of mild surrealism. You meet the fixer who has sold the gun to you – but he's there twice, for some reason, once alive and once dead. Even shooting the still living version of him doesn't really solve this dilemma. And more similarly strange interactions are still waiting for the player on the next screens. What is actually happening here is hinted at in a subtle way all the time, and the well-done epilogue will even spell it out explicitly in case there was still some doubt. The elliptic nature of the game is certainly its main asset – bonus for a good, if gimmicky, idea.

As far as player interaction is concerned, the game is solidly implemented. There are no puzzles to speak of; required or suggested actions are communicated very clearly, much in the same way Donnie Darko did it in the world of movies. One thing could have been improved here: Some actions are optional, some mandatory, but their foreshadowing is not different in any way. Even just a tiny, subtle difference would have made all the difference in the world with concerns to motivic clarity.

The main complaint, though, of course, is the game's length and depth. It is just a trifle, something to play for twenty minutes. The interaction is strictly linear (which, in a way, makes sense) and limited to, by a generous count, six decisions. What is there is certainly good, but the concept would be worth exploring further in a larger game. This one is more like an appetizer. 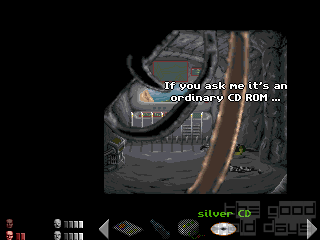