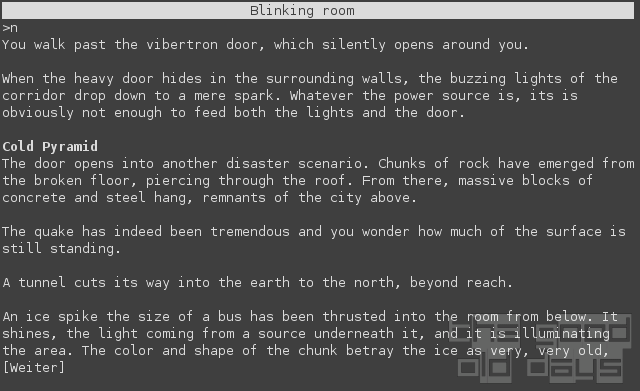 One of the planet's three suns is threatening all life as we know it. You are one of the few people who knows about it. On the way to the institute where you're supposed to try and save the world, disaster strikes already: Earthquakes destroy much of the subway system, killing all your fellow passengers. But these quakes also carve the way into a long-forgotten underworld full of machines and artifacts dating back to the early days of colonisation – and even before that.

Andromeda Awakening may be set in a cave, but Zork it is not. Well, maybe half of it: The game contains some imaginative physical puzzles; never obvious, but well hinted. The game is even quite long. An uncommon combination for a game running in the IF Comp.

The plot, which seems to be important to the author, on the other hand, turns out to be a little more spotty. Think of it as a mixture between Sphere and 2001. While the game might be long by competition standards, it is not long enough to really sustain such an epic plot. So at times, it comes across as unnecessarily heavy-handed, always in the danger of falling into the trap of 'purple prose'. A few strangely worded expressions only reinforce this impression.

There is also a questionable effect on the gameplay. Since the game is running quite close to the fine line of being overwritten, it becomes hard even for experienced players to parse the long blocks of text for usable objects and exits. In fact, some basically very good puzzles become insanely hard, because necessary objects which can be manipulated are shuffled under in endless descriptions of scenery.

All this makes Andromeda Awakening a game for the patient. Those who are will be rewarded with excellent old-school gameplay which, by itself, cannot be complimented too much!