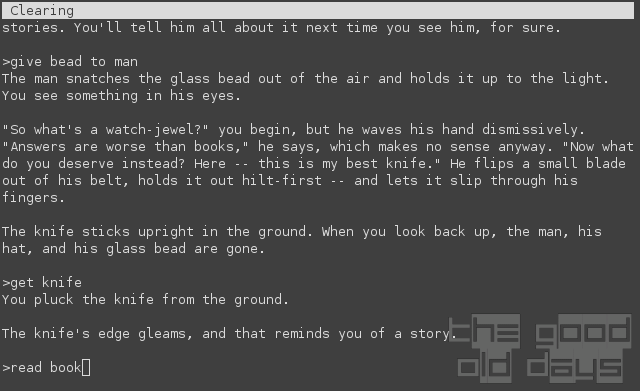 A simple farmer is looking for his axe to chop wood. In the process, he has to enter the nearby forest which, according to his superstition, must be haunted. His naive viewpoint is sometimes contrasted by those of a clergyman – or rather the farmer's interpretation of that guy's views. Until a shift in perspective occurs in the last few turns.

This is an attempt at a dark fairy tale and while the writing is servicable, it is not quite as efficient as required by such a genre. The two voices present here are only slightly distinctive, the final scenes with the reverend don't really add a lot to the overall plot anymore. Also, the language used evokes less vibrant imagery than expected in such a genre. Which would not be much of a problem if there was anything else to balance this out. However, there isn't.

The reason for that being is that the interactivity found in Cold Iron is unfortunately very limited. The game does a fairly good job of creating the illusion of interactivity at first, for example by listing additional locations and decent scenery descriptions. Under the hood, there is very little to actually tinker with, however. The game mostly prevents even movement into 'wrong' directions. In the mid-game (if this is even an appropriate term in such a short game), the game even sends the player to the correct 'next' location regardless of the movement command used. Hardly any objects, even of such listed in the room descriptions, are seriously implemented.

It is this combination which is problematic. What the game tries to achieve implementation-wise, it does very well; the technical side has a very polished feel to it. However, this could also be an effect of the game logic being so ultra-simple (i.e. complexity is the most common source of bugs).

Ironically, the writing is both the game's weak point and its most promising one. It's not strong enough to carry this game on its own right now. My personal preference is to go over the top if you're in the area of fairy tales. But subjectivity aside, there is certainly hope that this author might come up with something more interesting again in the future. 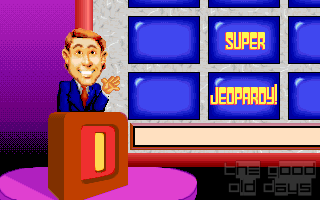