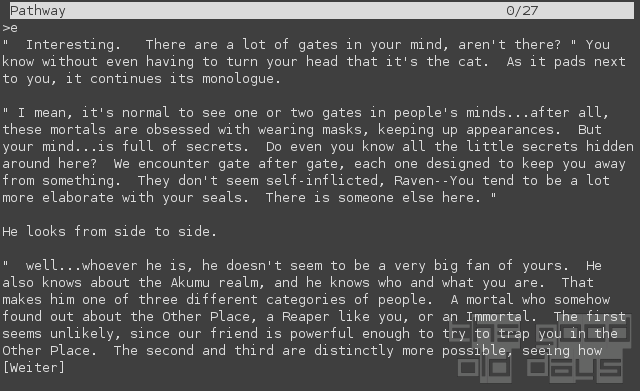 You awake in a grave, with no memory of who you are or what happened to you...

You know what that reminds me of? Roger Corman and his Poe filmes from the 1960s. Escaping from your own grave after premature burial might make for a cool game – Corman's Premature Burial even unknowingly suggests some puzzles in the scene where the protagonist explains the safeguards of his crypt and the dream sequence when all of these safeguards fail would be a good blueprint to design a game around.

Vestiges isn't this game. You start out in a crypt, but escaping is not a problem; the doors are not locked. Instead, the game draws the player's attention towards a stone altar which apparantely could be opened with the right tool, a 'glistening something' lying next to a tombstone outside and a talking cat enjoying itself on the graveyard. Even this might sound more exciting than it really is, though.

The problem with the game, aside from the extremely short length, is that it is both shallow and faultily implemented. The plot, if it can be called that, tries itself at a 'twist' ending, revealing the protagonist to be a rather bad guy. It might try to say something about the philosophical or religious implications death, but seeing the general tone of the game is very reminiscient to your average D&D fan fiction, it is unlikely that there is supposed to be some deeper meaning here.

While I'm not a big fan of cliché fantasy, I can bear it if it is supplement to a good game. In Vestiges, I spent most of the 15 minutes it took me to finish it wondering about obvious spelling mistakes and broken parser messages or trying to find the right words to refer to objects like that 'glistening something' mentioned earlier. The solutions of the puzzles themselves are spelt out in-game: Oh, the altar needs to be pried open; oh, you find a shovel with 'the approximate width and length to open even a very small crack'. I wonder if there is a connection. However, the wording is still tricky: You have to 'unlock' the altar with the shovel. Right.

It is unfortunate to say it so drastically, but this game would need much, much more work to be taken seriously. It shows competence in neither writing, nor implementation or gameplay. It neither has anything to say, nor has it seen any testing. There is nothing to see here, move on. 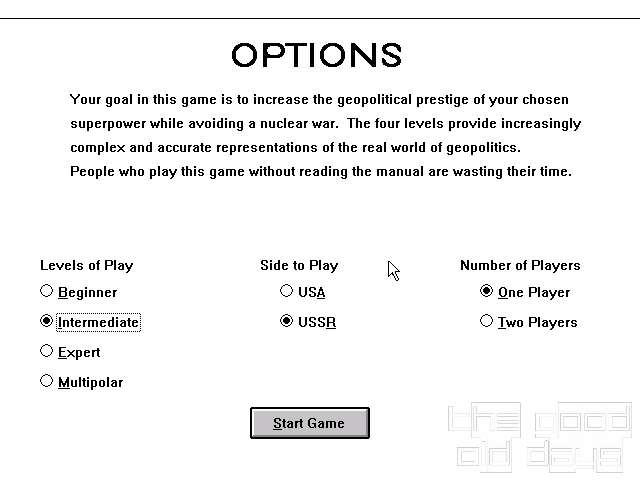