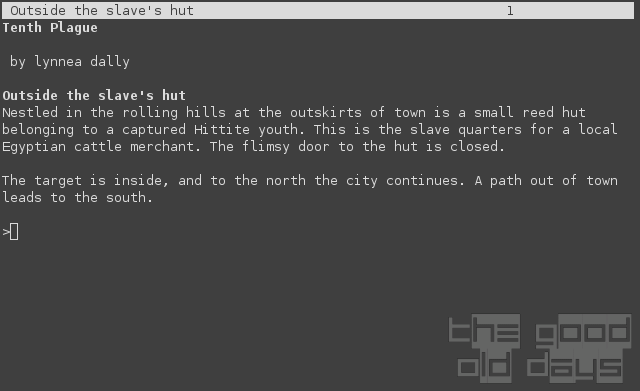 I used to think I lived in a fairly enlightened country. Until a recent visit from the Pope: Everybody went crazy, you couldn't watch the news anymore or read a paper – and all because of an old guy in a silly robe. As quickly as the madness came over people, it also faded again. Lurking under the hood until the next occasion. Nevertheless, compared to most other countries in the world, I guess I can still count myself lucky; at least religion plays absolutely no role in daily life here. It's not a subject of public debate, nobody cares what you do or don't believe in and it almost never appears as an argument or even topic in any media publications.

I'm reminded of how this is apparantely different on the other side of the Atlantic every year at the time of the IF Comp: Year after year, I'm fighting my way through religiously themed games. Some bearable, some even decent or good, but some go completely overboard with religious zealotry or rampant symbolism. Tenth Plague differs a little from the usual religious fare insofar that although it takes a story from the so-called old testament, its intention is critical.

This, however, leads me right to another effect: What is the best way to deal with elements of society you don't like? It is not openly fighting against, but ignoring them. For example, one really appalling paper here in Germany is called "Bild". It is well-known for printing half-truths or even outright lies. So these days, there is an online publication called "Bildblog" listing and uncovering all the crap published in that paper. It can be a funny read at times. But what can it possibly achieve? People who read this "Bildblog" know that the original paper is crap and not to be trusted anyway. People who like "Bild", on the other hand, wouldn't dream of reading "Bildblog". So it will never have any converts. All it does is attract more attention to "Bild" in even wider circles. Attention being the currency in the media industry.

After this rant, let's finally get to Tenth Plague, the game which will have a tough standing with me just for its subject alone. I'm supposed to play this spirit of vengeance, bringing the titular tenth plague over the people of ancient Egypt. For those who are not familiar with the background: According to the bible, the evil Egyptians used the "chosen people" as slaves. The Pharaoh refused to let them go, so their god unleashed ten plagues on the establishment; the tenth one being the "death of the firstborn". So it is your job to kill the firstborn sons of all non-belivers you come across. Not a very nice thing to do to start with and the game will give you some more insight into more of the arbitrarily cruel details of the story.

The game plays this out as a bleak horror story. While human beings are begging and groveling all around you in order to save their children's lives, you, of course, know no mercy (unless you want to lose the game) and kill one child after another in quick succession and in some of the cruelest ways imaginable. The writing is very matter-of-fact which is exactly the right choice to evoke true horror. The optional in-game commentary by the author (very nice feature!) tells us the first draft made the protagonist into a much more heavy-handed villain in comic book style. Think of DC's The Spectre in the 1970s. Personally, I would have preferred this, as it would have taken the game one further step away from a serious treatment of a religious topic, but I see the point of deciding against it.

The gameplay, unfortunately, is not much to write home about. Tenth Plague progresses in a completely linear fashion. Each house contains one kill and each is self-contained puzzle-wise. Meaning you usually just have to find your way in and sometimes have to avoid some resistence of the target's relatives. It is the old problem of writing in the superhero genre: What problems could a nearly omnipotent being possibly encounter anyway?

So this is a game which is really hard to rate. Trying to stay as objective as possible, the game is obviously well-intentioned in spite of my reservations. The general shortness and shallow gameplay don't earn it many points. The relatively thorough implementation, on the other hand, does. It gets a bonus for the courage of casting a completely remorseless and absolutely cold-hearted villain in the main role, too. So I'll call this average. Next time someone wants to sell me a game inspired by a biblical story, especially these plagues, it better be as entertaining as the Dr. Phibes movies – otherwise, may your god have mercy on you, because I surely won't!