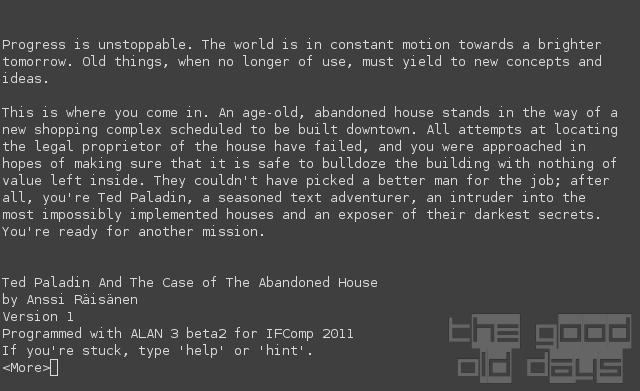 The question whether an old house should be demolished should be answered by an expert. Not anybody from the board for monument conservation, though, but Ted Paladin, private investigator. Why him? Because of his 'text adventure skills', as the introduction tells us. What kind of game awaits the player should now be obvious: Meta humour embedded into old-school exploration and puzzles. So this will not exactly be a candidate to win the IF Comp, but it might very well place high on my personal list.

So we arrive at this house and one warm-up puzzle later, we're inside. Just three rooms (or maybe four, depending on your way of counting), but those are crammed full of puzzles. Each room has got its own theme: The first one is missing most of its description, so the player has to conclude and derive from the skeletal description he receives what should, could or would be in this room. And then, after finding everything, solve a little music puzzle. The second room's task should maybe rather be called riddles than puzzles. You get vague descriptions and wordplay and you have to figure out what this might be – and name it correctly. Then, again, a final puzzle in the room which turns out to be rather simple.

So far, so good, but the real high point of Ted Paladin waits in the final room: It is a 'double room', actually, both living room and kitchen, which should be on different sides of a visible door, have somehow been magically merged into one. This is hard to describe; it contains some very interesting logic, though, because all actions of the player are first carried out in the living room, and unless the action was rejected, it will also be carried out in the kitchen. The problem, of course, being, that you really need to do something in the kitchen. So you have to find an aequivalent action in the living room to even get this far. Again, if this confuses you, try it out for yourself – very clever.

This final room, which unfortunately does not contain more than one puzzle, is what lifts Ted Paladin above the typical average. More of this, and the game would have been excellent!