The Chaos Engine
for Amiga (OCS/ECS)
Also available for: PC 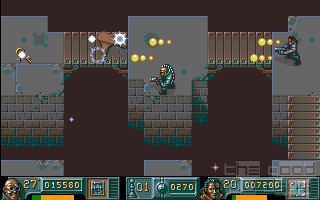 The Chaos Engine – a steampunk take on the Gauntlet concept. Let's say it's not that far fetched to assume there were fans of William Gibson's The Difference Engine among the Bitmap Brothers at the time. Though where said novel, although imaginative, is still well grounded into an alternate reality which does not sound all that far fetched, this game presents a scenario more akin to an apocalyptic horror movie: A Victorian scientist has built a machine able to influence the very fabric of time and space. That being fairly shaky anyway, what he unwittingly causes is the world turning into a surreal, monster-infected mess.

How else could you possibly react to this than by sending in the big guns and blowing things up? Two (out of a selection of six) mercenaries shoot their way through sixteen levels, structured into four 'worlds' until they finally reach the core of the cursed machine, destroying which will (hopefully) end this horror. Why send only two instead of all six, or a whole army for that matter? They're mercenaries, they don't work for free, you know – even if it would mean the end of the world, there is a principle involved! 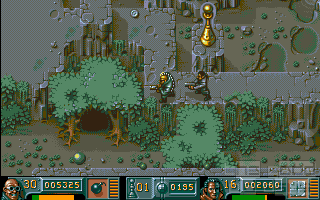 Also, there is the not-so-small matter of gameplay, of course. While the choice of characters follows the traditional principle of offering the full range of fast & weak versus strong & slow, things get a little more interesting when intelligence comes into play. Although definitely intended as a two-player-game, Chaos Engine is surprisingly enjoyable as a single player game as well. The computer takes over control of the second character in this case – and that guy's intelligence rating determines the usefulness of this automated help. Still, the character designs are nothing to write home about (though the sprites all look very cool).

This is different for the level design. The game's plot has been taken surprisingly serious in this regard. Each level is a little maze which cannot be traversed in the traditional manner. This is because the world around you is still under the reality warping influence of the machine: Walls seemingly appear at random, new passages open, enemies appear out of nowhere. All of this has, in fact, just been carefully designed, but in the heat of the action, it makes for surprisingly thrilling confusion which required the player to constantly re-adapt. Needless to say there is almost always more than one way through each level, depending on the choices the players make and which of the small puzzles (flipping switches, finding secret passages…) they solve.

The graphics help to get the mood across quite well. The muted colour palette gives a nice impression of this twisted version of the early industrialisation. The basic tile and enemy set changes about every two levels, so there is plenty to discover. The sound is pretty damn good as well, with an electronic soundtrack based on styles appropriate to each 'world'. For example, the opening tune has disaster sirens howling and in the final levels, close to the heart of the machinery, you will hear driving tunes to a mechanical stomping and the hissing of valves. The overall atmosphere being further enhanced by excellent speech samples announcing important milestones: Node Activated!, Exit Open!… 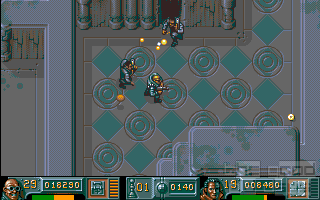 So, this might sound like the ultimate game now. Though of course, there is a downside to everything. The main thing might be that Chaos Engine is very hard. The enemies all follow a simple suicide strategy: They will always come right at you. They can afford it; they are many. The good guys are only two, each of them starting out with two lives. There is the opportunity to beef up your characters, like bigger guns or indeed additional lives after every two levels, though to afford that, you better collect all the money left behind by killed enemies or otherwise lying around – and grabbing everything also implies taking more risks.

One major obstacle which will make you lose lives more often than necessary are the limited controls. Though mostly solid, there is the classic issue of it being fairly hard to shoot in a specific direction without moving towards your target at the same time (risky). This is especially true for diagonal directions. It probably would have made sense to let the players turn their characters on the spot while shooting by holding the fire button, for example. This useful maneuver is impossible, because holding the fire button triggers the extra weapons instead. Unfortunately, most of these are fairly useless. Though some are indispensable in some particularly unfair situations – like destroying the generators in the level before the final boss confrontation. Speaking of the final encounter with the machine: That was really not very imaginative, was it?

I will admit that I for twenty years, I have never made it further than just through the second world (failing immediately in the third) without resorting to level codes taken from the magazines of the time. Though I also had seen others play it much more successfully, so it was possible. Finally, with a lot of patience and training, I made it through. Whether it will be fun for you very much depends on your willingness to really go the extra mile for this unforgiving game. For those of us who are quick on the trigger, there can be no doubt that this is probably the best of its kind. Not perfect, but also unsurpassed!

Mr Creosote:
Although it may not appear like it, the Preacher actually turned out to be the best character to choose for me. He is fast, i.e. he can easily outrun enemy fire and he can acquire the "shield" skill which just has to be the most useful one by a huge margin.
Herr M.:
Congratulations! Any hints and pointers, except being persistent?

Mr Creosote:
Update to the review: I've continued playing the game and I can now proudly announced that I have now managed to actually beat it without cheating

That muted palette is not a necessity on the Amiga. The reason I mentioned James Pond is just that – it's running on the same system, but it uses a completely different palette. That lollipop Chaos Engine was actually ported back to the Amiga in the 'AA' version. It's really a pity that the Bitmap Brothers lost their touch there. So that current re-release is based on that one, too

The music is another difference between the different releases, by the way.

It really depends on what kind of game it is, doesn't it? With Steampunk/industrialisation, I really connect toned down, grey-ish colours. That, of course, would not be appropriate at all in James Pond, on the other hand.
Herr M.:
Originally posted by Mr Creosote at 20:54 on January 4th, 2014:
I'm not sure why anyone would want to play the version with the lollipop colours

Mr Creosote:
Re. the news of 2014-01-05: I'm not sure why anyone would want to play the version with the lollipop colours 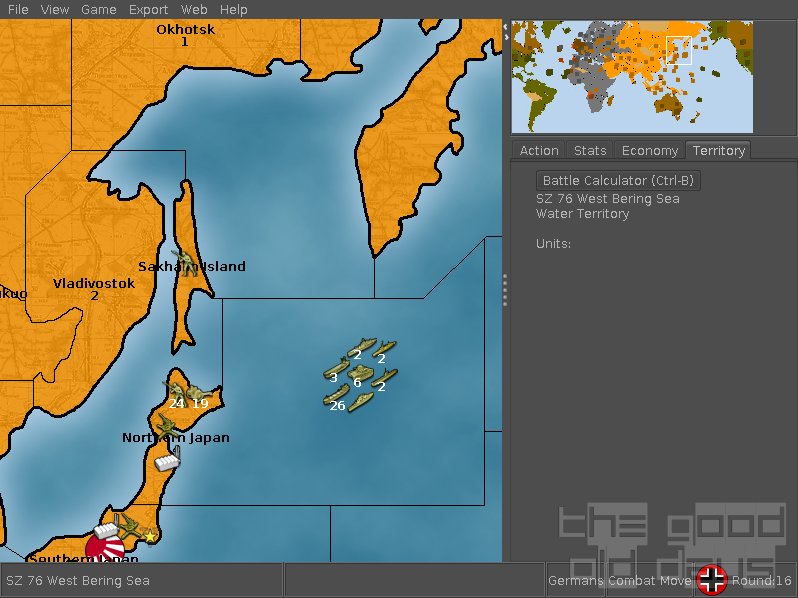