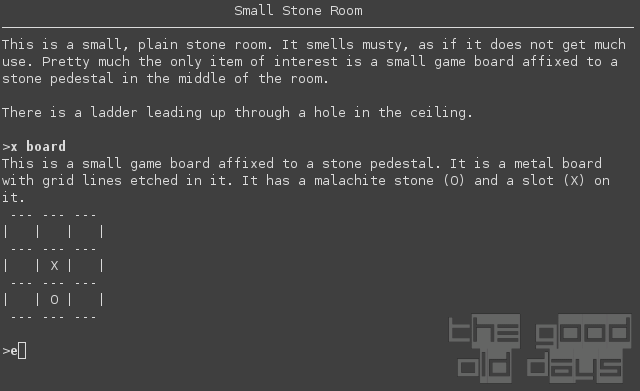 Joining an exclusive game-playing club is not a simple affair. Every aspirant has to go through an aptitude test which starts out very much like one of these silly games which, if Hollywood movies are to be believed, are also required to join a fraternity: You're blindfolded, filled up with alcohol and left in the woods.

After a short Adventure-ry introduction (which gives you the choice to forget about joining this stupid club and simply get on with your life), you enter the heart of the game: a series of board game challenges. Three times the same game, to be exact, but each time played on a more complex board. The goal is always to move a stone around until you manage to reach a certain spot on the board. There are invisible barriers which prevent movement in most directions and dead ends.

So, boiling it down to the essentials, this is a maze game; you solve three mazes by pure trial & error and you win. The mazes don't follow any logic which would make any strategy other than depth-first search viable.

From a technical point of view, this might be interesting since the directional commands are re-routed to movement on the board. This technical challenge was probably even what the author was interested in. However, how many players are interested in purely technical excercises? There is only minimal fluff around it to give players some sense of a world where these mazes are embedded into. It's done nicely, but eventually forgettable. The technical side of the mazes works well as well, but... well, it's mazes.

What is a bit irritating is that the game even includes a SOLVE command for the mazes. According to the documentation, this has been included for the sake of sight-impaired players as well as anyone who doesn't want to solve the maze, but still wants to play the game. The question, however, is: Why would anyone, sight-impaired or not, play this game that way? Without the mazes, there is no game anymore. So why bother?