The Elfen Maiden: A Comedy of Error Messages
for Interpreter (Z-Code) 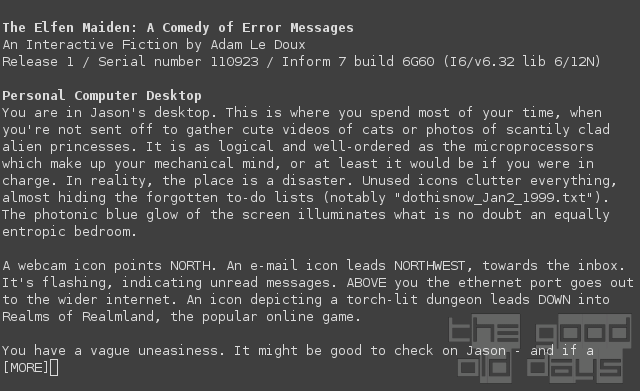 Imagining a computer as a quasi-sentinent being might not be a completely new idea, but it hasn't been done that often – especially as a comedy. This particular computer's role is to serve its 'master', as it calls Jason. This might imply doing whatever he wants, but now, the computer simply knows that Jason is about to make a mistake which will scar him for life. Being active in an online role-playing game, he has met an 'Elfen Maiden'. Things are pointing towards a real-life date between the two. However, there are no women on the Internet (at least not Elvish ones), so the computer just knows that this must be a guy just playing the part. A look at Jason's porn stash confirms he would not be (sexually) interested in another man. So the player, taking over the role of the computer, has to prevent this date from happening... and maybe hook Jason up with someone more suitable.

So... the techno-philosophical side of this game is not really worked out; it is never quite made clear how this computer's sentience is able to travel not only through the Internet (which would be imaginable as a metaphor), but also enter other devices like Jason's phone and control it. Nevermind, though – comedy allows for such liberties.

Trying to manipulate the world around Jason without an actual physical presence is the key to some of the game's puzzles. For example, before anything else, you need to wake him up. Or prevent him from leaving his workplace in order to go to the date later. Other puzzles deal with the virtual world itself: Jason spends too much time in this RPG – how to get him out of it? The best interactions, though, come to pass when both worlds overlap: So Jason has got this female coworker who seems like a good candidate to set up a real date with; first, you need to find out something about her, though, and find a way for the two to start some (private) communication.

The Elfen Maiden works, surprisingly so. Skewed metaphors concerning the representation of abstract technological concepts are good for a few laughs, some technical inconsistencies are easily overlooked and the player's paternal instict is tickled by Jason's complete inaptitude to fulfil even the most basic social functions. You just want to help this guy, because in spite of not being characterised very deeply (actually, hardly at all), this is the prototype 'sympathetic loser' character.

Although the game's length is perfectly appropriate, the only thing which could still be improved is the entertainment while leaving the path of the final solution. The game sets up more things than it delivers upon. Even if they are rejected by the game or don't lead to a successful ending, additional actions could provide entertainment to the player. So, for example, you can collect an “angry bird” at one point. Somewhere else, a room description of a location in the WWW talks of “tweeting birds”. A player who makes the (fairly obvious) connection is not rewarded by the game: Releasing an “angry bird” here could, for example, be interpreted as starting a flamewar on Twitter. Some of these actions are handled, but so much potential has not been used in this regard.

Mr Creosote:
Feel free to share anything about The Elfen Maiden: A Comedy of Error Messages (2011) here!
[Reply] 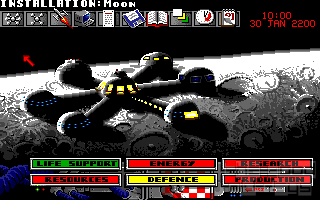