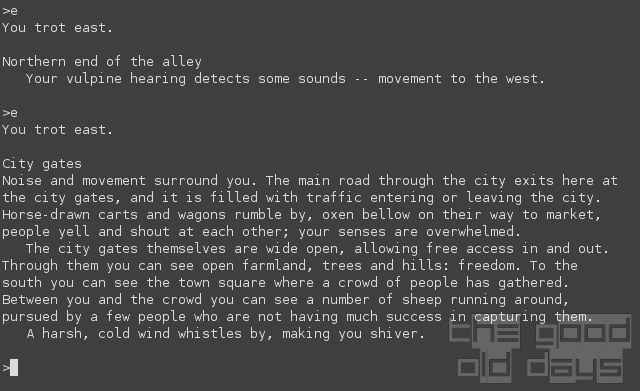 The king's protégé, engaged to his daughter and the future king's best friend: Your life looked good. Then, Prince Alsanter was murdered; stabbed with your knife by an unseen assassin while you were in the room with him. It might have been a setup, but who would believe you? Although the king and his court wizard do not believe in your guilt, they have no choice but to follow the verdict: guilty. Instead of execution, the king gives you a final chance: He has the wizard put a curse on you, turning you into an animal which is routinely hunted – either a rat, a fox or a snake. The only hope would be reaching another powerful wizard and, with his or her help, prove your innocence.

So you've got the choice between three paths through the game. These will affect the places you visit and the characters you meet as well as the puzzles, but the basic plot remains the same. Each of the paths alone is already pretty long; much longer than most new games these days and surprisingly, both due to the storytelling and the gameplay.

The puzzles centre around using your newly found animal senses and abilities. A rat, for example, is not the strongest of fighters: a cat or a dog can be a deadly menace. On the other hand, it can crawl through the tiniest openings, it feels at home in sewers and it has got strong teeth. A common problem of all the animal forms is transportation: The helping wizard (whose identity also varies) lives in a faraway city and of course, hitchhiking is hardly an option.

The tasks the player has to fulfil originate from the current situation very naturally, without feeling forced. They are mostly well implemented and imaginative. The occasional guess-the-verb or unmotivated action occurs, but these are rather rare. Very solid.

The story is another matter. It can hardly be called original: The lazy medieval setting with its cliché characters (who are defined more by their roles than any actual individual traits) at least offers some plot twists which manage to keep the player's attention. The story progresses mostly in interludes in which the player sometimes even takes over another role for a short time. Sometimes, these could have been less wordy and a bit more interactive, even if the general setup was fine in most cases.

So is this a good game? Definitely, yes! It becomes more and more uncommon with every passing year to find such an ambitiously large game which is so well implemented. Will it become a timeless classic? Probably not – setting and plot are too generic and the game mechanics, while mildly original due to the nature of the puzzles, don't do anything groundbreaking, either. This is 'just' very good craftsmanship, but certainly nothing less.