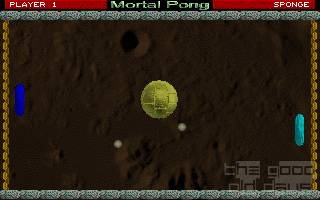 Okay ladies and gentleman. I'll now invent a new kind of review. The “drunken re-review”. “So what is this?!” you ask. Okay, lemme tell you:

I used to run a few abandonware sites years ago. I still have most reviews from back then and usually they're not very good. So - what should I do with them - throw them away? Nah, too easy! A while ago I gave the whole bunch to Mr Creosote and he picked out the few that were okayish. But what about the rest? I redid some and I forgot about the most of them.

So now I'll try a different approach. I will read the old review. Fetch the game and play it again. Then I'll compare and - hopefully - come up with a better review. What about the “drunken” you ask? Well... that is optional. At the moment I just had a bit of wine. But that should not concern you. I started with this before I opened the wine.

Let's start with the old review:

Quote:
Oh yeah - Ultra Pong this one... different opponents, playing with more than one ball (imagine my surprise when a 3rd ball popped up to the initial two...) - this one is challenging - a really good game if it weren't for the well... uncomfortable controls. Player one gets 'A' and 'Z' ('Y' on european keyboards) and player two gets the arrow-keys, this means if you are playing alone (against the computer) you got to deal with 'A' and 'Z', not TOO funny for the right-handed majority - laying your arm on the whole keyboard is not very suitable (best solution for 2 players though). Anyway, if you manage to get used to this you will have lots of fun. Trust me, it's pretty hard to beat the strongest computer-opponent 'Evil Homer' - he's pretty good! Maybe one of the best adaptions of the Pong-theme out there...

Okay, so I got the basic idea. Pong... right... and you can play against serious computer opponents. Pong against the computer is always a tricky thing. Either the computer plays totally stupid - which is no fun - or it plays perfectly - which is even less fun. So right. This sounds like last time I played this only Evil Homer was able to beat me. Let's have a look at the available opponents then.

Right - first there's “Sloth” with the description “Slow as dirt, even you could beat him!”. Then there's “Sponge” - “A slow but steady opponent.” He is followed by “Frank” - “A good player with a good eye and good moves.” The last one is the already mentioned “Evil Homer” saying “I am Evil Homer, I am Evil Homer, I am the best!”

So much about that. So back then I was younger and as things are... they tend to get better over time. Like wine and... well... okay, let's stick with wine.

Bad thing. Guess I'm not like wine - I don't get better over the years. But I won't hide. I will take a ride against Evil Homer now. Let's see how I put up against him.

Okay... this was... devastating. I was able to get 2 balls past Homer. This might sound like something, but Homer got like 100 past me. So well. I declare Homer unbeatable. Prove me wrong!

So... What is missing from this review. Ah right! The basic Pong rules. Okay... There is a ball - and there are two paddles. Now the ball moves to one side. The paddle on that side tries to catch the ball - now it bounces back to the other side - and now that paddle tries to catch it - etc. etc.

That is the basic Pong. Now this version tends to get annoyed if the players can't decide who's the better one - so it throws in extra balls until they can decide.

When I first read my old review I thought it was not saying a lot. But playing the game again I tend to admit, that it really said a lot... if not everything. The game is good. If you want a somewhat modern version of Pong try this. The computer opponents make sense. Seriously.

Ah just one thing: There are some (sort of) digitized voices saying things. To sum it up: Better turn the sound off. (And not only for the voices.) 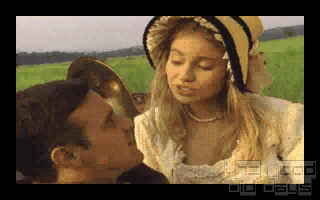