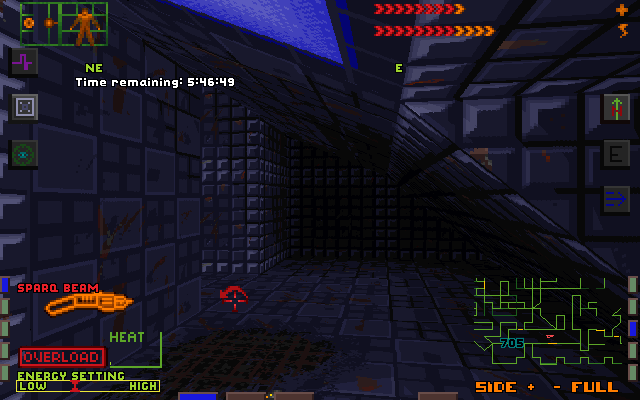 In the future everybody knows how cyberpunk works, and that's the reason the TriOptimum megacorporation makes that shady deal with a nameless hacker, offering him top-rate wetware just for removing the moral limitations from one of the biggest AIs in existence, SHODAN. What could go wrong?

Not that it needs an answer. Actually what I would ask is why the hell you make a more than probably dangerous experiment with an AI, and then accept getting a few months of healing coma inside the space station handled by that same AI. Obviously when you get on your feet all there is left are lots of dead bodies, and the roaming deadly experiments which SHODAN is now planning to repeat on Earth. Unless you can stop her.

If for some reason you don't know that already, I must say this SHODAN is one the biggest game characters from all time. Mostly thanks to the voice she received on the CD version (also, I don't think she has any gender on the floppy one). A buggy mesh of weird electronic sounds, and complete with a huge dose of contempt. Really gives the feeling of being against a mad and broken, but really menacing, computer.

And that's what creates this game's great mood. Yes, the game is still a game, and you go around shooting enemies, exploring and looking for items in what is mostly a FPS, but still, it's the feeling of being alone inside a space station, surrounded by the stench of the dead and with under SHODAN's constant watch which makes the game.

That's what you will remember.

Not the story itself, which is hard to follow, as it's told by recorded logs you find around, which means you won't hear them in order (and so you'll end not paying much attention to it).

Not the the game, which is fun, and on a true 3D environment impressive for it's time (even if that cyberspace can get confusing).

The reason you'll play this game is the bad guy, SHODAN, the mad computer with a god complex.

But that is not to say the game is bad. Actually the game tries to be something new and mixes several genres. Manages to do a good job, and when you end looking around corners trying to find an empty corridor to reach your objective, or looting the bodies in search of much needed medical supplies, you'll forget this is actually a shooter.

A final note: as I said the CD version includes the famous voices, and I made the review with that version. It even includes a higher resolution mode (I wonder if they planned to do this with the Ultima Underworld games), that's the reason for the various screen sizes. If you can, play this one. Even if you don't like the CD version, it includes the latest floppy version also.