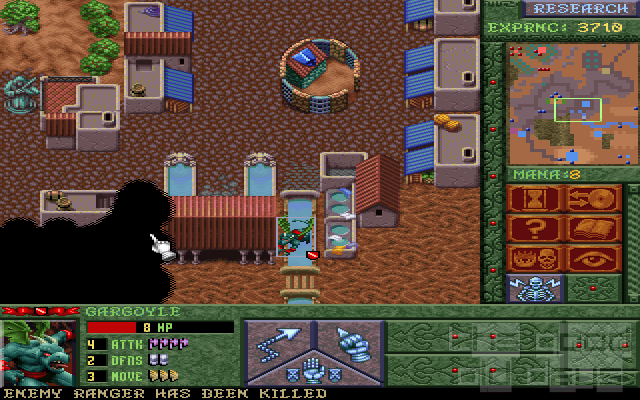 Really, the D&D license has produced lots of games of all kinds. A bunch are good, some others are of varying quality, and then there are those, just as this one, which, honestly, goes nowhere. Not that it lacks some nice ideas for a RTS, it's just that it ends not knowing how to use them, and ends into another, unsurprisingly, forgotten game.

What you do here is being a wizard, battling enemies not with spells, but summoning monsters. For this reason you only need one resource for your army: mana. This is continually generated, but creating new golems, which are your basic unit, helps a lot as they also create mana. Of course, this doesn't end going smoothly, as you have the downside of having to manually harvest that mana.

Don't ask me why, but that just shows the problem here. The game is really simple, yet they decided to slow it down, in this case forcing you to stop whatever you are doing each five minutes to check the mana your golems have stored. Add tp this the typical awkward controls of old RTS games and a really slow pace, and you can see where it all goes to.

Going back to the golems, they don't serve just for the mana. These beings are the base for creating any creature or building. Need a wall? Transform them into pieces of wall. Need a building? Place four of them on one of the foundations around the map and create a temple, barracks or whatever. Need units? Send a golem next to one of these building and transform the golems into new units.

Of course, not all monsters are unlocked at start. You have to expend experience, a thing you get killing enemies, to unlock them. Very easy. And if you want to improve you units there is also a way to do it, each can carry one artifact, which are usually hidden on buildings, and once equipped they can be used a single time, as happens with potions, or passive items, like protective artifacts.

It's all really simple. And, as said, this would be a great thing if not for the slow pace this game has. Lacking variety on the gameplay, what you would like is building a small force to vanquish your enemies, instead you end watching your units slowly move around while the computer lacks any clear idea of what it should be doing.

Were it better done, this could have been a fun game. But just as this, it's mediocre, and be happy with it.