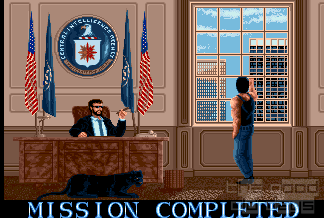 Quote:
A supercop and a black panther team together in a high risk mission.

An actual black panther, in case anyone wondered. As seen on the wonderful title screen. Its roar, police sirens and gun shots all merge with the dynamic music into an exciting mixture of sounds. Without further delay, Patrick Swayze (directly from the set of Road House) and the panther are dropped from a helicopter. This has to be great, right? 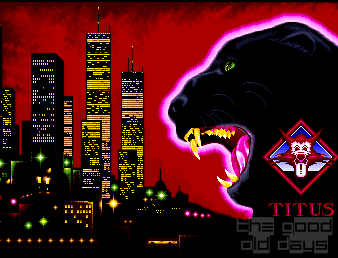 Titus hit the overall feeling of a 1980s brawler movie well. The whole look, the senseless, unquestioned violence, the thin nothing of a plot about rescuing a hostage… The task is beating one's way through five levels. Streets full of rockers, punks, skin heads and similar kinds of riff-raff. There are no friends to be found here, even if the mission begins in a high-class rich district. Which is apparently in the grip of gangs as well.

Differences between enemies only exist on purely visual level. Their behaviour is identical all around. Apart from the level bosses, that is, who don't just tower over everyone else, but can take quite a punch as well.

Diverging from the genre standards, there is no third dimension for movement. Spatial positioning therefore only plays a minor role. Instead, it all comes down to timing. Performing kicks and blows at the right moment, you can overcome any superior number. Otherwise, you'll find yourself circled and beaten up. From time to time, the panther will (automatically) intervene and then, there is the trusty Magnum. At least until ammunition runs out (which conveniently happens to lie around on the streets). 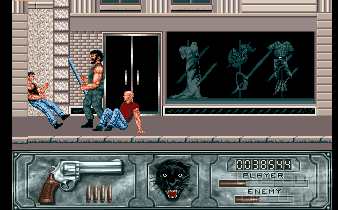 When the going gets tough

This support is quite needed. Different from genre conventions, it is not necessary to beat all the enemies before being allowed to proceed. On the contrary: avoiding fights is a viable and recommendable strategy, especially because the number of enemies is endless anyway. It is key to get through each screen meeting as few as possible, because life energy is always short.

In this respect, it is noteworthy that energy isn't just lost by taking hits, but also from one's own actions. The more exhausting the move, the more energy it takes. This way, the panther will also lie down for a rest at some point.

This turns nasty on the way back: after locating the hostage, you're supposed to walk back all the way, through the same screens from right to left. Double playing time without having drawn a single additional background, that's efficiency! Just that at this point, things become completely unmanageable, because the other guy apparently shares the protagonist's energy bar – and he's completely helpless against attackers. This makes him an easy target for all the thugs. Particularly since he always seems keen to just stop dead on track for no apparent reason. 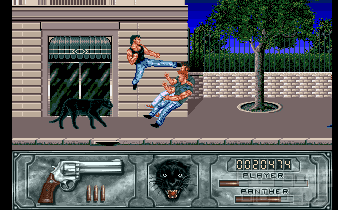 Two hits in one

Even before that, playability suffers from the rather lazy panther and the sluggish controls (the flying kick works about every third time), the imprecise collision detection (it is occasionally advisable to just turn away from an enemy and hit the air for it to count) and the lack of scrolling. Flip-screen nature leads to the usual issue of invisible enemies being present on the sides.

Graphically, the fighting may look not too bad on static screenshots, but unfortunately, animation is as stiff as it gets. The protagonist “floats” across the screen with unmoving torso, just as all the other sprites. In action, it all looks a bit silly. Speaking of other sprites, those have not been equipped with the same number of animation stages as the player avatar. And the initially praised music unfortunately just repeats itself after few seconds in an endless loop, therefore annoying the player in no time.

The spark therefore just isn't there. It's all quite typical for Titus: they had a go at a popular genre, got it working somewhat to a basic degree, but the game simply lacks any polish beyond that. High difficulty and small scope just add to the overall poor impression. Stupid brawling without any variety – no historical significance.

What a mediocre game! Walking from left to right and beating up evil guys. There's also some kind of 'story' behind it, but I have to confess I don't know it exactly. When playing it again for the review, I couldn't find the intro, no matter how hard I tried!

But I certainly remember a bit of it! Some pictures come into my mind showing you (the muscular cool All-American guy) standing in an office talking to some official-looking man sitting at his desk. Of course there was also the flag! You talked about someone being kidnapped and you having to rescue him. Don't remember who it was though...

Anyway, you arrive in a typical suburban street from the air. Maybe a helicopter brought you there, but nobody can say for sure. Your black Panther is with you. This is probably supposed to be a unique element of the game, but it really adds nothing to the fun-factor!

The rest is as usual: Hitting and kicking the bad guys' asses! Your 'pet' randomly kills enemies sometimes. You also carry a gun but only have limited ammo. Of course new bullets are lying around on the streets. At the end of each level, there's a boss.

Then after some hours of playing, you arrive at the place where this anonymous hostage is held. From now on, you have to walk from right to left instead, namely the same way backwards! The man follows you. As long as he's visible, he always gets beaten up, but leave him alone in a screen for some seconds and he'll have the area cleared of opponents - weird!

Wild Streets is (maybe just almost?) impossible to beat! Surviving the very first level is hard enough as you loose energy not only by getting hit but also by almost every single move! On the return trip, you even loose energy walking! Didn't the programmers ever play their own game???
Don't expect too much downloading this one. It can be fun for some time, but that's it.