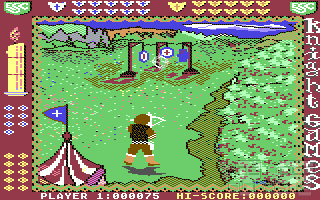 The Middle Ages: was it an age of chivalry and knights in shining armors? Or a dark age of oppression and plague? We'll maybe never know for sure. One thing is for sure though: people liked brawling back then - just like today! And that makes all the other questions completely useless and uninteresting!

Fighting is spread into six different categories. Swordfights in two different locations, axe-fights, maces and basically every other standard weapon. They all play alike. You have four moves which are activated by pushing the joystick into its different directions. The goal is just to knock out the enemy before he does the same to you. Both opponents have the same amount of energy and the same number of 'lives'. Loosing two lives, a knight bends down in exhaustion and the fight is continued later. This detail is actually a bit annoying, why not continue the fight until the wind is knocked out of one completely?

The 'other' competition is archery and crossbow. Here you have to hit the targets as often as possible in a limited time. Moving fake ducks in archery, hung 'classic' crosses and circles in crossbow. These competitions are interesting because your 'shaking hand' is emulated nicely.

It is a bit disappointing how similar the competitions are. The game promises more than it can actually hold. But the fighting - as simple as it may be - is really nice, it doesn't always have to be Street Fighter or the Wild West after all. Give me a good ball & chain fight in front of a castle every day! 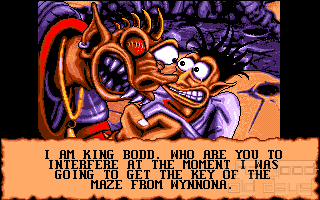