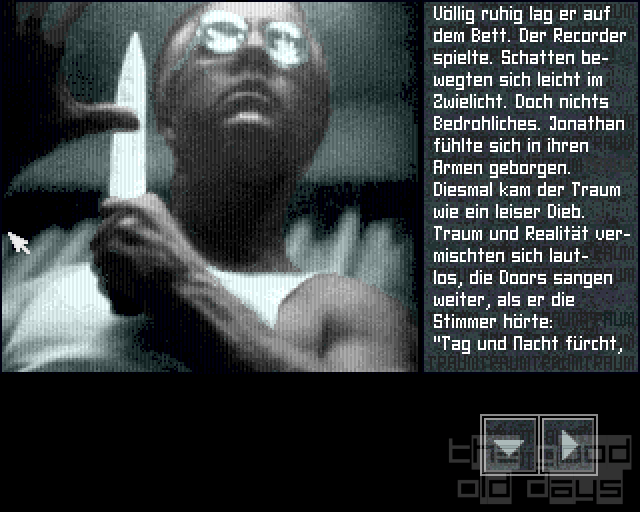 Jonathan is a university student who still lives with his parents. The reason being that ever since an accident 11 years ago, he's been confined to a wheelchair. What he lacks in physical attributes, he makes up for with psychic powers: He's got minor telekinetic and clairvoyant abilities (which he doesn't really like to use) and he is the head of a clique of friends who, in their free time, like to solve mysteries. Their latest one: Jonathan has had nightmares hinting at an approaching evil and a magic book and a ring will play some role in preventing all of this. 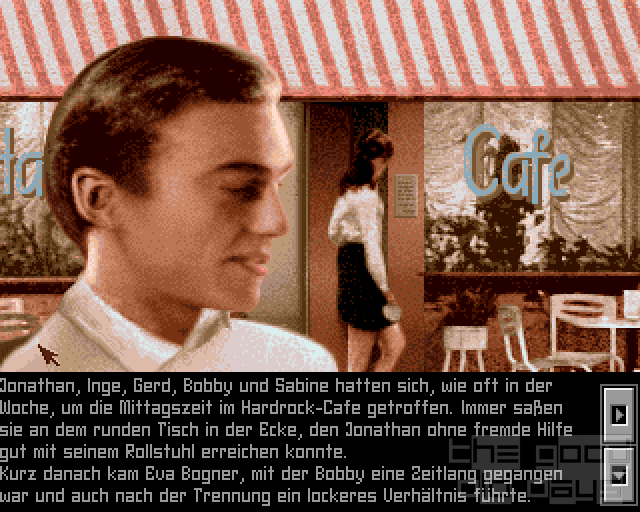 Like the previous 'Artventures', Jonathan attempts to target an adult audience. The narrative tone is serious and full of exerted imagery. It is also verbose at times, but this is strangely inconsistent: While cutscenes and key exposition points have been written with some care, any intermediate interaction has been executed in very mechanical ways. The narrative is not really embedded into the gameplay (and vice versa) – a common structural weakness.

The bureaucratic interface has got to take a part of the blame for this. All interactions with people or objects are handled through hierarchical text menus which can't really be called intuitive. In many situations, it makes things unnecessarily hard due to the number of clicks required for simple actions and it isn't even consistent (for example in the way of exiting menus and cancelling actions which always seems to work in different ways). This interface makes interaction with other characters a pain – and mostly, it is not even worth it from the writing side anyway, as even conversations with Jonathan's best friends consist only of brief one-liners. Exploration and experimentation are made hard by the interface and not rewarded by the writing and programming. Not a good combination.

The interesting gameplay aspect lies in Jonathan's disability. He has to depend on his friends' help to get around and do many things for him. This idea goes back to Suspended, of course. Learning what you will need the people for requires a lot of failure and backtracking, though. Quite often, the player will be stuck without knowing it, only to die a couple of scenes later. Compared to the previous two games from the same team (Holiday Maker and Stadt der Löwen), Jonathan does take a big step forward with respect to interactivity, but boy, is its interactivity model flawed! 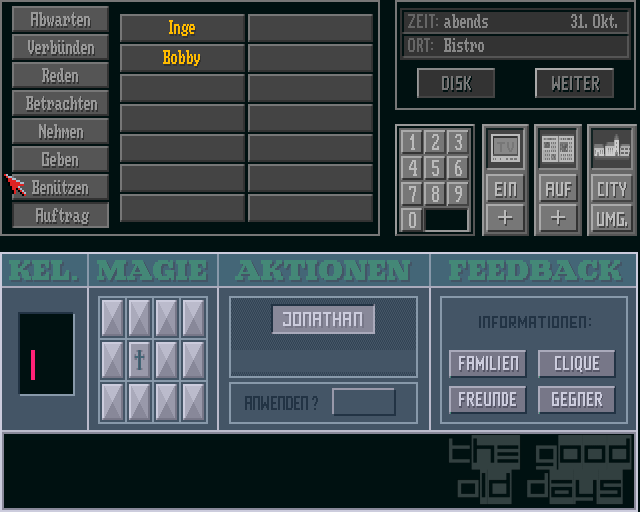 The worst offense, though, and what finally makes Jonathan fail, is the storytelling itself. The plot about occult magic is nothing you wouldn't find in a third-rate fantasy novel for male teenagers. As strange as this may sound – the whole character setup only reminded me of the Five Find-Outers (there is even a hint that this might be intentional: Jonathan takes place in a city called Kronstadt – and Fatty's last name in the German translation of the books is Kronstein) with some early-teenager love Fotonovela sprinkled in. And as much as I liked reading Enid Blyton's books when I was a kid, this is not the sort of thing which mixes well with wannabe-serious themes.

So in the end, Jonathan is not up to its own requirements. Telling a serious story aimed at an adult audience is much harder than some unspecific fantastic plot. Without its own pretence, Jonathan would fare much better. Even then, there would still be the interface getting in the way and the inconsistencies in the art – but both could be perfectly forgivable (although admittedly, stealing images from popular movies might not have been such a great idea; you will even find Michael Douglas and Sharon Stone visiting Kronstadt's disco). Unfortunately, it does not look like lack of dedication resources was an issue, but rather (after three games, it has to be allowed to make this judgment) that it was lack of talent which prevented the game from living up to its own plans. 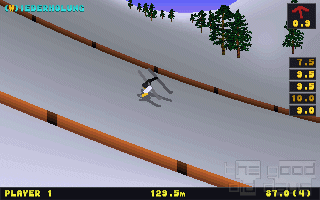