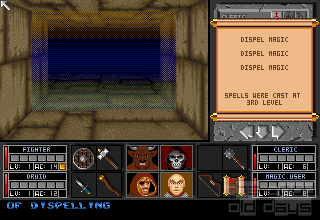 [Mr Creosote] Black Crypt is the first game made by Raven Software who later got relatively well-known for their more action oriented (but also first person/3D) games. Their first one is a fairly straight RPG in the tradition of Dungeon Master, though.

[Wandrell] And doesn't try much to keep away from DM. A few improvements here and there, but mostly it's a clone. Except for a clear thing, it's really tougher than the game it imitates.

[Mr Creosote] Obviously, the graphics are improved as well. Though let's get one thing out of the way first: There is a plot, but… what did you think of it?

[Wandrell] Plot? That's a good question. For what I understand, the characters are visiting the place and then decide to get into the crypt. Typical hack'n'slash plot, and it doesn't need much more, you are here to kill monsters and loot treasures.

[Mr Creosote] Actually, there is a baddie who wants to conquer the world in that dungeon; that is why the player's party goes there. “Evil cleric banished years ago builds up his power again” and so on.

[Wandrell] There is a short story in the manual, didn't read it. Prefered going directly to the spells. And the introduction doesn't tell much also. Anyway, I say that the story should be told in the game, even if the method to communicate with the user, which means scrolls you find around and tablets, isn't the best for it.

[Mr Creosote] So we seem to agree: Plot-wise, this is not much. The mediocre of mediocricy. Gameplay-wise, you start out by creating your party…

[Wandrell] Of a warrior, a cleric, a druid and a wizard. Not much choice here. Tank, support fighter, offensive mage and support mage.

Only the warrior can't use magic. But sometimes there is not much difference from one mage to another, except for the druid using bow and the wizard throwing knifes, as the magic need recharge time and memorization. 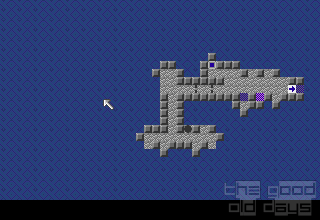 [Mr Creosote] This restriction to the fixed classes wasn't actually so bad. To be honest, this is pretty much what everybody usually selects anyway and it makes things simpler for beginners.

So, with few minor changes, this is basic D&D territory (albeit unlicenced). Magic plays a big part in the game and the three magic users have different spells, many of which are absolutely crucial not only to win, but also to play the game – like the automap spell.

[Wandrell] Or reading tablets on the walls, like the druid's read runes. But usually the magic is throwing offensive and defensive spells to keep up to the difficulty of the enemies. And having a number of slots for magic leaves you little options for non combat spells.

Also, as happens in D&D games, to learn new spells you need two things. First you find and copy them to your book, then you get to the required level to use them. So it is possible to miss some good spells if you don't explore carefully.

[Mr Creosote] Exploration, though, is a double-edged sword. You will find items and spells, but it will also get you killed. A lot. One thing I never understood with evil wannabe-overlords is that they always seem to put their weakest guards near the entrance of their fortresses and dungeons so that adventurers/heros can first face these low-level creatures and gain experience before they meet the heavy-hitters. This particular baddie is smarter: Even the very first creatures you meet might very well kill your entire party in just a few blows!

[Wandrell] Don't know how many times I died when I suddenly found the first enemies you find, the floating eyes, can use magic. Actually, I think there are weak and strong variants of the enemies, but nothing to recognize which one you meet, until you have died.

[Mr Creosote] One problem with defending against them is very typical of the genre: Although your party consists of four people, you cannot post guards. So if you are busy filling up your water supplies at some well (or something along those lines), an enemy might just sneak up to you from behind and kill you before you can even turn around. That makes no sense, because why don't (for example) two of your guys just watch the others' backs?

[Wandrell] I think one of the Ishar games let you put the weak character surrounded by the others. But that kind of complex party ordering is impossible, you are expected to be constantly on alert, and take advantage of the dungeon layout, running around and using walls to cover your back. Of course later you will find enemies that can sneak around at any moment, giving you even more problems.

Apparently, for what I see on the manual spells, you can create walls and set runes, which would improve things a bit. 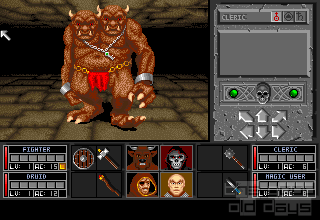 [Mr Creosote] So you need to be alert at all times. Also, you do need to look out for hints; for example, if you simply go down the first flight of stairs into the second level, you will be killed by the infamous two-headed ogre instantly. No matter how skillful your battle tactics are, he will crush you mercilessly unless you carry special magic weaponry.

So ironically enough, although the simplistic party generation promises a game for beginners, the actual action in the dungeon is anything but that. Black Crypt must be one of the hardest games of its type ever made!

[Wandrell] Finding the sword is great. But it would be better if the fighter actually managed to hit with it. Lost half of my party before I managed to kill the guy. Mostly the ogre serves as a way to control your progress without using puzzles. Because that's a thing a miss here, good puzzles. There are lots of hidden corridors, of course, but in the end it's just looking at all the walls and you keep going forward.

[Mr Creosote] Indeed the difficulty can serve as a motivator in some cases. When you finally manage to beat a monster which has blocked your path for so long, this can be very rewarding.

[Wandrell] Yes, it's a bit masochistic sometimes, but even after getting killed non-stop I got fun. The game manages to keep a nice balance between all its features.

[Mr Creosote] Now, I must admit that I obviously did not play the game to completion, but I doubt this would be enough for me on the long run. The challenges were not too varied in the part I played; your party gets stronger, but so do the enemies. There are no major (or even minor or any) plot developments. It's just killing more and more enemies by using a growing arsenal of magical spells and heavier swords as well as finding more and more secret passages.

[Wandrell] Good description of Dungeon Master clones. But it's true this one goes straight for action and killing anything that moves.

Actually for me the problem is that the high difficulty sometimes is a bit cheaty way of stopping you. Only reached fourth floor (out of 28), just the two first levels took me too long for this kind of game, even more when you take in consideration it includes an automap, stopping you from getting lost.

[Mr Creosote] It's definitely not the interface getting in the way: The main things work comfortably enough (I could have done without the complexity of three different layers of clothing and containers within containers in the inventory, though), the automap in particular is excellent, because it highlights 'landmarks' in a recognisable way. The game is not unfair or cheating – it's just damn hard!

[Wandrell] Also recollecting all the daggers and arrows is a nuisance. But I can't think of any dungeon crawler of that time that would solve it, and it doesn't stop the interface from being easy to use, even if I would like a way to know how much better is the weapon I just found compared to the one I'm carrying.

[Mr Creosote] That's right, some visible stats would have helped there. Maybe this is a touch of realism, because a sword would not have '+3' inscribed on its shaft, would it?

[Wandrell] Well, there is at least a +1 dagger. But that only serves to indicate it's better than the other daggers, while you don't know the difference between a mace and a hammer.

[Mr Creosote] How did you like the graphics and sound?

[Wandrell] As to be expected from an Amiga game, they were good. Lacks the variety of Dungeon Master 2, or Eye of the Beholder, but enemies are clear to recognize and nicely done, while the dungeon, even with the few graphics it has (wall, columns and doors basically) manages to avoid being too repetitive, even if some of the corridors are monotonous. 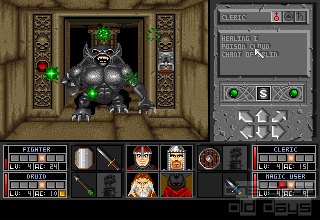 Casting a spell on this tough enemy

[Mr Creosote] I found the magic effects pretty nice in particular. For the technically minded people out there: This is one of the very few games which uses a Halfbrite screenmode, allowing twice as many colours than usual to be displayed at the same time.

[Wandrell] I think the main thing with spells is that they manage to be colourful, contrasting with the palette of the dungeon itself.

[Mr Creosote] Yes - and they have some nice animations. Small ones, but well done.

[Wandrell] Summing it all. We end with what is a Dungeon Master clone by the book, even if it adds a few novelties, like automap, in the end it's a clear attempt to make more of the same. Luckily for it, it manages to do so well, so it's fun, but so hard that you will need time to finish this one.

[Mr Creosote] The last aspect cannot be stressed enough: Black Crypt has got none of the handholding which more recent games are so proud of – it will let you run into your doom right away within the blink of an eye and then laugh at you for failing! There are absolutely no rules or physical roadblocks preventing you from making a complete fool of yourself. If this is alright with you and you have time – and I mean a lot of time – it's very nice. If Eye of the Beholder is too easy for you (or annoys you with its lack of automapping), Black Crypt might be for you!

Though personally, I will definitely never finish it.

[Wandrell] Maybe I'll give it another chance other time, but in the time it takes you to advance four levels you would complete half of another game.

[Mr Creosote] So, experts, get this one if you have a free year or so. 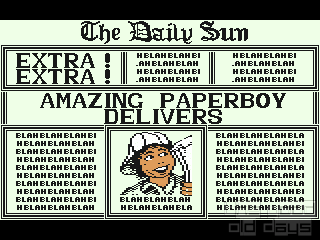