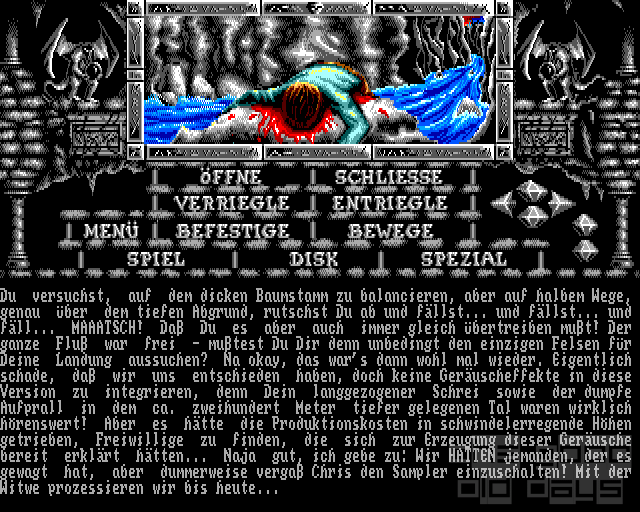 Dave, 17 years old, is spending his first vacation without his parents up in northern Scotland. While taking a swim in a lake, he passes through a small waterfall… and finds himself in a foreign world populated by magical creatures! Here, he is immediately drafted to overthrow the evil elf king…

Soul Crystal is a strange one. It uses text as its primary output medium, but it has no text parser. Instead, commands are constructed using a point & click interface. There are keyboard shortcuts to trigger some basic commands, but actually typing them is not even an option.

This is strange, because although the (small) still pictures showing the location are actually well drawn, the game has got a very old-school feel to it in almost every other aspect. Plot, puzzles and tasks could hardly be more 'classic'. The writing is verbose in the places relevant for progress, showing clear priorities and it reeks with self-referential humour. Which is basically good, but after reading the same joke about being too lazy to write yet another location description for the third time, it does get old.

Oh, by the way, you can die

While the interface prevents the common pitfalls of a text parser (i.e. there will be hardly any problems with phrasing your commands), it nevertheless introduces its very own problems. First, it is simply much less effective to click through a multi-levelled textual menu: First, you select the broad category of the command (which, more often than you'd like, is not all that clear anyway, so you have to either guess or remember), then the command itself, then an object from a list and then maybe even another object from another list. In that time, you could have entered the same command three times using the keyboard.

Second, and this is maybe even worse, the phrasing of the commands is very awkward at times. This is a 'native' German game, but the use of language in the imperative form of the commands just doesn't work. For example, to take off a piece of clothing, you have to 'lose' it. 'Losing' something is also the way to drop an object. To use something, you have to 'apply' it (though the German word is even ambigous – players could first assume it is 'turn'). Very strange, looks like the bad translation. Coming from where, though?

Putting language and interface annoyances aside, Soul Crystal is a very solid puzzler, though. If you take it for what it is, that being a humourous treasure hunt, you will have fun with it. On a special note, the soundtrack is actually surprisingly good! So a game which is not only well written (in the way that things are always clear and to the point), but also looks and sounds good. Not exactly a very modern one in its time, but twenty years later, who cares? 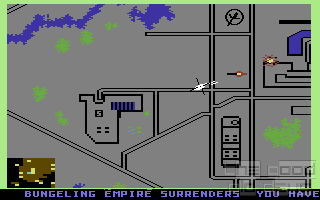