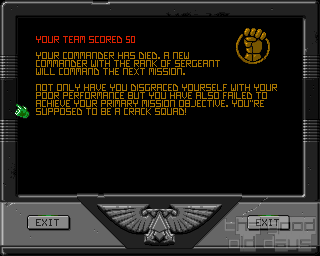 Riding on the success wave of HeroQuest, Games Workshop released Space Crusade, a Warhammer “40k” variant for the McDonald's audience. So, it's basically a simplified and toned down version of Space Hulk. Unlike the computer game Space Hulk, Space Crusade's conversion into electronic form turned out to be a very faithful one.

For those who haven't played the board game, compared to Hero Quest, Space Crusade takes place on a slightly more complex level. Each player controls not just one character with clear abilities, but a squad of characters which are mainly distinguished by their equipped weaponry. Each turn, every character can be moved, they can open doors, shoot, throw grenades etc. So in the end, Space Crusade plays much more like a simplified Laser Squad rather than a more complex Hero Quest sequel. Simplified, because the characters don't have action points which can be freely distributed between the different possible actions, but movement, attacking and the rest are all separated from each other in the rules, making the player decisions much more one-dimensional.

The missions the space marines are sent on are usually well-defined. They rarely boil down to killing everything in sight. This is often not even possible due to the demanding difficulty level. Instead, the squads are sent on sting operations, like for example retrieving a specific object. The maps support this very well in the way that they usually allow for a stupid, full-frontal attack as well as a somewhat more sneaky approach. Where it gets really interesting, though, is that even the human players compete with each other; they can act as allies against the aliens, but their alliance is always a fickle one.

Again, compared to Hero Quest, the greater proliferation of ranged weapons introduces new tactical considerations like range and line of sight into the game. Which shows us all in a fascinating sort of way how fuzzy the genre definitions as usually used in computer games are: Just a few minor changes to setting, rules and scope and what 'clearly' fell into the role playing genre before has now turned into a tactical war game. And a good one, too. Not excellent, but good.

Though also in this computer game, it is quite obvious why Space Crusade never gained the mass appeal of Hero Quest: The added complexity, as minor as it might be, tips it over the intuitivity barrier again. It's the same reason anything more complex than Risk, as appreciated the more complex variants might be, will never become a mainstream success. The general public's threshold of what rules need to be learned and how much data needs to be remembered is just painfully low. Bemoan this all you want, but it's a fact – which should not stop us more patient players from appreciating our own favourites, of course. Space Crusade is a borderline experiment which is both interesting as an experiment, but also for its own sake. See for yourself!

Wandrell:
I recall the tabletop game from when I was a kid, but barely remember how it worked. I think it was HeroQuest in space with more cards and rules. And the map was actually made of four pieces you had to connect. Still, one of those curious and fun games GW did before they decided to just milk their main franchise.
[Reply] 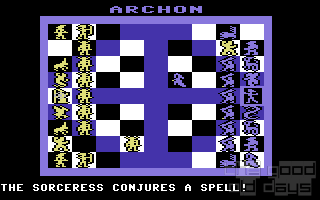