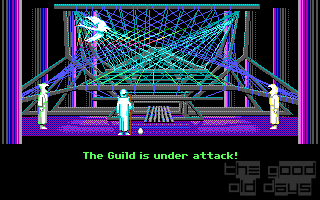 Loom is interactive poetry. I'm not talking about the dialogue or text itself (which aren't bad), but the overall realization: the harmonic presentation and development of an idea using graphics, sound and timing, with emotion in mind. Scenes and situations are crafted in a delightful and very subtle manner, which make some very well-known story clichés take an completely new form and uniqueness. And that is the most positive aspect of Loom: it's something you've seen before, but in a way you have never thought of. The talent of Brian Moriarty brought us a game that is both simple an refined. That's its true beauty.

And we have Tchaikovsky. The “Swan Lake” is one of the most haunting pieces of music ever written. Its beauty is both convoluted and deeply dramatic, but here it's integrated well with the scenes and moods that are thrown at the table. I think I prefer the non-talkie version of the game, as the voices tend to sound like someone who is reading his son a story before the kid goes to sleep. The acting's not bad, it just sounds childish and it is anti-climactic in contrast with the epic music and dramatic mood of some scenes. It's better to use the imagination and listen to every character's voice in your own mind.

Playing Loom is like seeing the movie “9”. At first glance, everything is “so fairy-tale” (“so dark-future”, in the case of the movie), but a minute later your realize there's something more deep going on, something very profound. Plot twists and all, Loom's full-blown drama reaches its peak at the end, just like the aforementioned movie. The game's bittersweet ending is one of the most beautiful and moving scenes I have ever seen in a game, it's very poetic. Now that I think of it, it's better that the game never had a sequel, because the ending is perfect the way it is.

There are two PC versions of the game (if you don't count Steam's Windows re-release): an EGA floppy disk version, with 16-color graphics and no speech; and a VGA 256-color version on CD-ROM, with voice acting in redbook CD Audio format. If you plan to use SCUMMVM to run it, you also have the option of the FM-Towns version, which has 256 colors but no voice acting, as this version's files can be loaded with the Virtual Machine. The CD-ROM version had to remove many dialogue lines, beacuse they were limited by the amount of waveform audio a CD supports (this was in a pre-audio compression era), so if you play the FM-Towns version you have the advantage of more colors and untouched dialogue.

By the way, the graphics are neat in the EGA version, but I have not played much of the VGA release to give an opinion. In the first case the color palette is cleverly used, as in most scenes there is a dominating color. Think of Krzysztof Kieslowski “Three Colors” Trilogy: the weavers island is dominated by blue and its derived colors, the blacksmith's is dominated by red, reminiscing the furnace, etc. You can see some examples of this in the screenshots I provided. I think this was a most interesting detail, and added much to the already compelling character of one of the greatest games in video game history, in my opinion.

Hirschacker:
bin auch ein fan von "luckers arts"
Wandrell:
I recall playing on hard mode and seeing the secret scene. I really got surprised, caused an impression on me. But for what I heard the CD version lacks it, they improved graphics and sounds yet left out the best motivation for playing on hard.
Butterflyking: 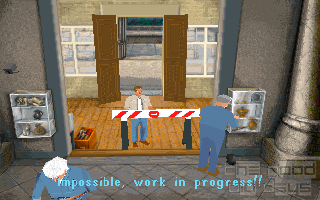