Prophecy of the Shadow
for PC 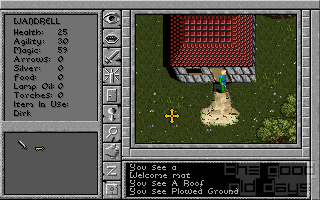 Well, life surely is problematic in a fantasy world. You are raised by some old wise man, and then he gets killed, leaving you with a quest nobody has the slightest idea what it’s about. Not that you will worry much about it.

I always thought this game looked amateurish, in the worst meaning of the word. First thing you see, obviously, are the crude graphics, filled with monotonous forests and ugly houses. But then you start walking, and see that to make it all worse your character walks slow as hell.

And nothing improves from here. You could say there are some interesting things on this game, but it would be a lie. Apart from the use of photos for the characters, including a few animations, there is nothing to note here.

At best, this is a bad attempt at copying the Ultima games, but it all feels like they didn’t know what they were doing. Just take a try at the dialogue system, based on keywords. Great, lots of things to ask, but I don’t get why having a topic called “island” when the answer is “what island?”

But in general all the characters, not just the dialog itself, all the plot, is moronic. Really, you go to talk with the sheriff, and he already knows your mentor is dead. But to make things confusing, he is convinced his adopted son is the culprit, as if he didn’t know the main character is this adopted son. The sheriff of the town next to your home.

And the way of making money at the start also shows how deeply they thought thing when making the game. You enter the tavern, as about job, get ten coins and then you are kicked out. Repeat until you have a hundred and fifty coins or so. Tedious, but seems to be the only way of getting money.

Money for what? You could say. It's hard to tell, because all I was able to do on this game is wandering around aimlessly, getting moronic conversations with NPCs and not having a single clue. You are told to get a book and carry it somewhere on the intro. Good luck going any further, because you'll get bored before you even care about it.

Mr Creosote (2012-08-05):
It should be mentioned that this was SSI's first attempt to replace their (by that time) aging RPG engine which had served most prominently in the AD&D Forgotten Realms games. Not necessarily for the better, granted.
[Reply]