Lure of the Temptress
for Amiga (OCS/ECS) 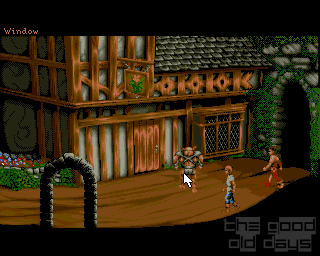 [Mr Creosote] Lure of the Temptress is the first game made by the British development studio Revolution Software. They later became quite popular, especially with the Broken Sword series of games which they update and market to this very day. Their older games, including this one, have been released as freeware in the meantime.

[Wandrell] I suppose because this was the first they made, they decided to do a small experiment on adventure games, creating the engine they called "Virtual Theatre", the same one to be used later on Beneath a Steel Sky. But this game is unlike its successor in several things, starting with the fantasy plot.

[Mr Creosote] Which is fairly basic, I must say: An evil enchantress called Selena has taken over the kingdom with her army of orcs… sorry, "Skorls". You are Diermot, you wake up in the Skorl dungeon and now you have to overthrow Selena.

[Wandrell] And it won't go much further. It's a nice touch that the town is being patrolled by the enchantress' monsters, but otherwise it doesn't feel like there is any kind of impending doom. Actually, all the atmosphere is very thin, and things go little beyond "the bad girl is bad because she won against the king". 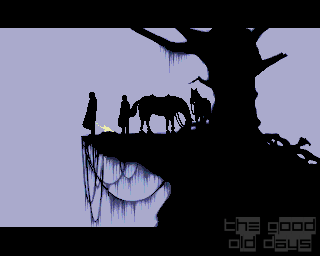 [Mr Creosote] Talking about atmosphere, though, the intro – made entirely of silhouette images – did set up a very nice one initially. It's just that Selena seems to have consolidated her power very quickly: The city indeed does not look like it has been freshly conquered.

[Wandrell] But also she has not been able to destroy all resistance yet, and people fight against her power. Again, it looks all vague, apparently there is some kind of resistance attempt, but people look apathetic and accept their situation.

[Mr Creosote] Their last rebellion attempt failed miserably, as Diermot meets the underground's last agent chained to the walls of the dungeon as well – dying. Also in the dungeon, he meets Ratpouch, a jester imprisoned for making fun of the authority. Together, they escape.

[Wandrell] And suddenly find themselves in the conquered town, knowing only they should alert the smith of the danger to the resistance. This smith, who is strangely trusting for the situation they live in, quickly gets you mixed in a rescue mission.

[Mr Creosote] …and in the end, you will need the help of a dragon to defeat Selena. Which you do. But you don't get the girl in the process.

[Wandrell] So, a fairly standard plot. Sometimes attempts to be a bit funny to solve it, but in the end there is nothing memorable about it.

[Mr Creosote] What they did try, though, is to make the city where all of the game takes place in come alive; as Wandrell said before, the system is called "Virtual Theatre", and it basically boils down to characters following their own agenda to a degree.

[Wandrell] Supposedly, they show some kind of interest on the world. Visiting places they like, and moving around town. Mostly, this means they wander around town following the path they like.

[Mr Creosote] In gameplay terms, this means that you will not always find the characters in their static place. Sometimes, the blacksmith will be in his workshop. Sometimes, he will be in a pub. Indeed, it is a common problem of worldbuilding in adventure games that everything seems to be completely static apart from the protagonist. This system attempts to address this.

[Wandrell] But fails, because there is no clear way to know where the character you are looking for is. As there is no way of telling the time, you don't know if at this hour, this guy is working or resting, and much less is there a way to know where he is. It just feels random and makes you walk a lot around.

[Mr Creosote] Well, the world, i.e. the city, is not that big, so you will usually locate people quickly enough. My own complaint about this is something else: There is too little meaning given to these schedules the characters follow. Take Shadow of the Comet, for example. That game does not have any freedom for its characters, it's all pre-scripted. Yet, the town nevertheless feels more alive, because the characters don't just walk around; you pass a young woman and her mother sitting on a bench, when you talk to them, they will invite you over to their house. Or a gypsy musical combo will appear on the market square at a certain time. Again, all of this is scripted, i.e. the same events will appear each time you play the game, but it works better as far as impressions go nevertheless.

[Wandrell] Not that it can't work. Ultima VII manages to have a schedule for the characters that makes sense. Still, there is more to the "Virtual Theatre". Supposedly you can watch characters do things, but as far as I have seen, this ends just in you telling your sidekick to do things for you.

[Mr Creosote] Which gets us to another speciality of the game: the character interactions. You are not limited to the usual multiple-choice conversations, but the game also allows you to give other characters quite complex commands, like where they should go, what they should do there; and such commands can even be chained, i.e. you can tell them to do 10 things in a row. 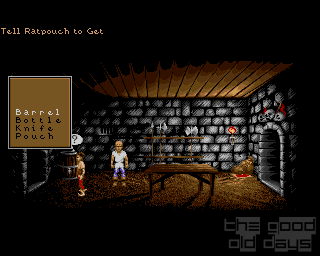 [Wandrell] That part feels a bit like a leftover from the IF days, as it has little actual effect on the game. The commands end being things of the style "use this tool on that object".

[Mr Creosote] One problem with this system is that there is little feedback whether something worked, or what the effect was in general. But you're right, the whole interface, not just the one designed to order people around, is very reminiscient of text adventures. Just that it isn't nearly as efficient: In the time it takes me to construct a complex action using this slightly clunky and error-prone mouse-scrolling interface, I would have typed the same thing in three times over!

[Wandrell] And you should add a bit of pixel hunting. And the fact that some objects are only selectable after you examined another, like the tap on the barrel at the beginning, forcing you to examine, then move the cursor around again to see if anything new appeared.

[Mr Creosote] Again, the recursive examining was very common in text adventures. The whole design screams text adventure – apart from the difficulty and nature of the puzzles.

[Wandrell] I wouldn't call what this game offers puzzles. Mostly it's just giving around items, or just talking to other characters. The difficulty comes in being lucky and finding who should you give the item.

[Mr Creosote] Well, you could say the same things in a positive way, too: There are virtually no abstract puzzles for the sake of having puzzles. You solve the game by interacting with other characters. Which is much more real than anything else. 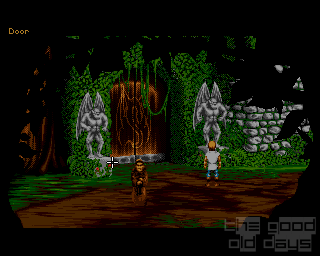 [Wandrell] Still, having part of the puzzles being solved just talking, and other part being not so clear just makes them confusing, and may end being irritating.

[Mr Creosote] Everything "may" be irritating to someone. That does not mean the design is not sound.

[Wandrell] Still, comparing it for example with Monkey Island 2, which contains some puzzles which may make you getting stuck just for not looking in the right place. MI2 still gives you items with a clear use, even if it may not be obvious until you use them, and always make you feel like you accomplished something.

[Mr Creosote] Of course, I'm not saying that the game does not dissolve into carrier chores at times. You can find an example of a weak puzzle in every game. Yet, things are not nearly as simplified as on Broken Sword, for example, where really all you ever had to do was exhaust all conversation options with the only person in the current room. Even if the execution is far from perfect, I believe the puzzle pieces are there in this game: the kind of puzzles/interactions and the interface go well together.

[Wandrell] In the end, if it were not for the "Virtual Theatre", this would be, for me, another adventure game. And yet, what this system offers has little to do with what the game actually gives. Just read the manual description for the engine, and then play the game a bit.

[Mr Creosote] I will agree that this is not the best game ever. The execution could be improved quite a bit. At the very least, it is quite short, has two stupid action scenes and the ending is quite anticlimactic. Nevertheless, I like the combination of some very old-school methods with the a very modern approach at problem-solving: Making games more about character interactions is something which has still not been done right a lot of times in the history of gaming. With a slightly more involved plot and more well-rounded characters, this would have worked very well! It is truly unfortunate that Revolution pretty much abandoned this concept with their next game already again. Beneath a Steel Sky is without a doubt the better game, but it is much less ambitious.

[Wandrell] I too think a middle point between this an Beneath a Steel Sky would have made a great game. Sadly, that's not the case.