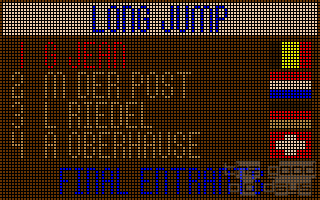 Carl Lewis might have been the athlete of the 1980s, but by the 1990s, his star was sinking. For the 1992 Olympic Games, he only qualified (and won) in his favourite discipline, the long jump. In the sprint distances, he did not even compete. In the 4 x 100m relay, he gave a solid, but unimpressive performance (by his former standards). It became clear that he was turning into a thing of the past. Not unlike this game he 'endorsed'.

The reason being (talking about the game now) that Carl Lewis Challenge brings absolutely nothing new to the table. Up to four players can compete in five disciplines: 100m sprint, 110m hurdles, javelin, high jump and long jump. They're all best played in the same way such sports games have been handled since the early-mid eighties: waggle the joystick as fast as you can in order for your digital avatar to perform better. Two alternative control methods, based on rhythm or timing, can be selected as well, but they don't offer nearly the same frantic sports-like experience.

Multiplayer is, unfortunately, handled quite awkwardly. Players always go individually, one after the other – competing against different computer-controlled opponents. If all human players make it to the finals, however, they will still not race against each other. Instead, there will be four finals with three computer athletes in each. So the only challenge is to beat your friends time, you will never have the satisfaction of actually beating him in direct competition.

Before this begins, though, players can select to send their athletes through a five-week training exercise. Each athlete can be given an individual training plan, with different kinds of training carried out in different intensities and so on. Hoping that their stats will increase, making the following arcade part easier, presumably. This part, however, is just excruciatingly boring and plain uneventful. Examine a couple of numbers, adjust some others and watch the initial ones change (or not). The game can even be played in just this management mode, with the actual events being evaluated automatically. But who would want to do that?

Sports management can be fun. Various football team management games have shown that well enough. It could also work for athletics. It could be very satisfying to nurture your own athlete and then guide him to victory. Carl Lewis Challenge is not the game to build this bridge, though. And even looking at the arcade part alone, it just has absolutely nothing new to offer. We've all seen this before, it is short and quite easy. Which makes the very good animations and the catchy 1980s title track just wasted. Pity, and really not appropriate for an exceptional athlete like Carl Lewis. Let's give him a nostalgic bonus point for trying, though.