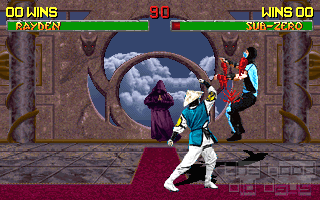 Mortal Kombat II. Sequel to the fighting game that made gore a selling point, this game takes that to new heights, with new fatalities and combat techniques, different types of finishers, and a cast of twelve playable characters, two boss characters and two hidden characters for you to test your skill against.

Mortal Kombat II takes everything that people thought was good about its predecessor and improves it. So much so that it is still considered one of the best, if not the best game in the series. First released in arcades, it was later ported to a large variety of home systems, of which the PC version is considered the most faithful to the original arcade version.

The plot is thin, and serves mostly as a reason for you to climb the single player ladder in order to face off against the mighty Kintaro, a four-armed warrior of the Shokan race, and his master, the evil Shao Khan. As you may surmise from the term “ladder”, the single player mode consists pretty much only of a gauntlet of battles fought against the vast majority of the rest of the playable roster, capped off with the battles against the aforementioned two boss characters.

Apart from the standard kicks, punches, block uppercuts and legsweeps, by way of certain key combinations you can also perform special moves, such as spitting acid, teleporting, throwing bladed fans, freezing the opponent or the floor, and other such moves, each being unique to a specific character on the roster.

These are topped off by the finishers, some such as the well-known fatalities being unique to each character and allowing such various endings as electrocuting an opponent until he explodes, deep-freezing him and shattering his upper body, or turning into a dragon and biting him in half. Others are identical across the board, and mainly differ in the resulting appearance of the victim, such as the babalities, which allow you to humiliate your opponent by turning him into a baby.

It is certainly one of my own all-time favourites, and something I still play quite often. Definitely worth a try.