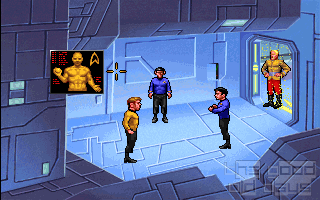 Star Trek: Judgment Rites is the sequel to the 1992 title Star Trek: 25th Anniversary, and Interplay clearly felt that they had a winning formula there, as the gameplay is by and large identical.

Voiced by the original actors from the hit TV Series themselves, the game manages to evoke the mood and the characters with a precision that is sadly lacking in most videogame adaptations from other media. The game itself is divided into eight chapters, or episodes, each of which has two distinct gameplay components.

First there is the flight segment. Unfortunately, it is by and large an uncomfortable affair, though there is some amusement to be had in it nonetheless. Fortunately, they learned from the previous game and provided the option to choose to skip the space battles entirely.

Once that is done, there will usually follow some form of dialogue informing you where to head next. This is, surprisingly, the copy-protection scheme of the game. And an impressively well-integrated one it is. Modern games (and some of its contemporaries) would do well to learn from this example, where the copy-protection is not only completely unobtrusive, but also adds to the immersion in the game. To proceed, one would have to take note of the location given in the dialogue. You would then tell Mr. Chekov to bring up the star map, on which you would select that location. The names of the stars are not displayed on-screen, however. No, inside your manual you would find a star-map, with the names of several destinations listed. You then have to pick the right one in the game. Pick the wrong one, and you are pitched into a fatal space battle (regardless of whether you chose to skip space combat). You are not even granted the opportunity to bring up the star map again.

Pick the right location however, and you are led to your destination, where you will be able to “beam down”. At this point the game becomes a fairly standard point-and-click adventure game. Surprisingly, the puzzles are mostly quite logical, and off-the-wall solutions are few and far between.

Definitely a joy to play, especially now that the space battles of its predecessor are no longer mandatory.