Crisis in the Kremlin
for PC (DOS) 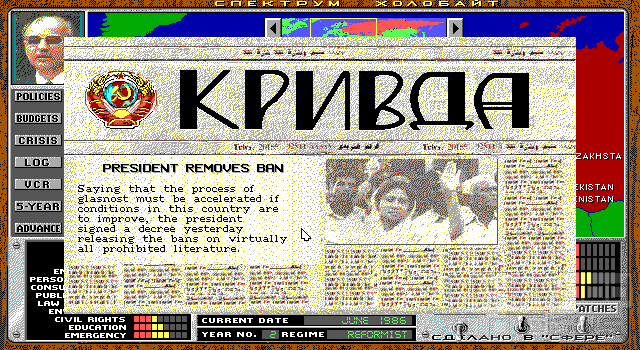 In 1985, what would happen to the Sowjet Union was anything but clear. In 1992, when this game was released, the largest country ever had already ceased to exist. Mikhail Gorbachev's attempts to reform the state had ultimately failed – even though on a global scale, it had lead to an end of the cold war which had held the world in terror for decades. Though it might all have gone differently. Crisis in the Kremlin puts the player into the shoes of the new head of government in 1985, giving him complete freedom into which direction to lead the country: Will you also try to declare Perestroika (restructuring) and Glasnost (openness)? Will you go even further and pursue the nationalist ideas which, in the actual history, won out? Or will you even try to stabilize the traditional Sowjet system again instead? 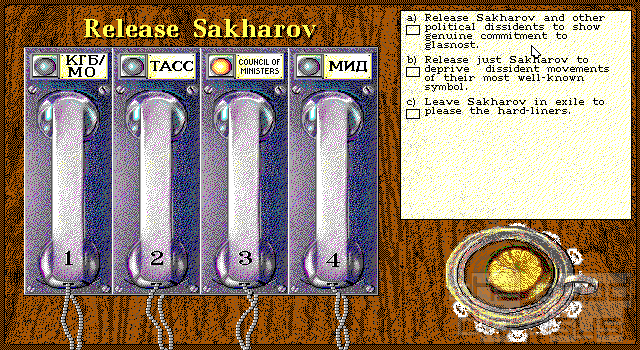 Whatever direction or goals you choose, the most significant problems stem from the historical situation. The structural problems the country was in, like the non-working distribution of food supplies or the rampant military budget which was not helped by the ongoing war in Afghanistan, are complemented by special, historically accurate events which usually deliver especially severe blows to your plans. When the nuclear power plant in Chernobyl will have its accident in 1986, how will you react? Whose side will you be on when the Second Gulf War breaks out?

Which basically dictates the two major aspects of gameplay: active planning and reactive decisions. The former involves setting the general policy in major fields of politics on a scale of one to ten: How much freedom of press should there be, how aggressive (or cooperative) should the external policies be and so on. Yearly budget planning complements this and well-presented statistics help making these decisions. The latter, on the other hand, consists of more or less unexpectedly (since, as mentioned, most events reflect actual historical events) incoming events or news which give the player a couple of pre-defined choices how to react. 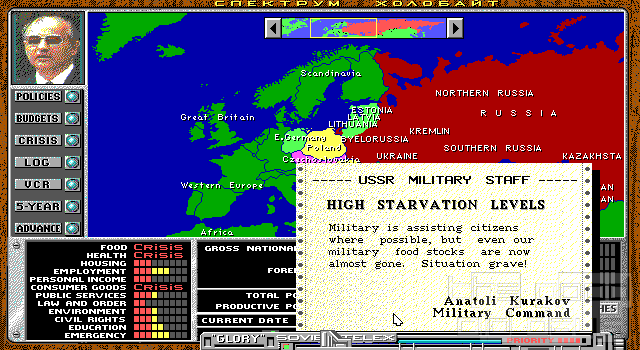 The Eastern Block is crumbling

As far as play time is concerned, the reactive part takes up most of it. Aspects found in other similarly themed games have not been included. There is no appointment of ministers or other staff; there is no direct interaction with other influential representatives of the party, lobby representatives or other world leaders. There is no daily/weekly or even monthly schedule to manage. There are not even special events, like speeches.

Nevertheless Crisis in the Kremlin hits the nail right on the head with its core conflict: Finding the right balance of reforms which are necessary in order to overcome the problems, but not doing it too radically in order not to needlessly destroy existing structures (which would only make things worse). At the same time, of course, keeping in mind not to offend the old guard which still holds much of the power and which might stage a coup against you at any time too much.

So in spite of the gameplay limitations, the game becomes more complex than expected on a purely intellectual level. Are your actual day-to-day decisions (reactions to incoming events) in line with your stated policies (long-term planning)? Is there a gap between policies and public perception? What is the right way to balance long-term goals with required short-term success? The player's task is anything but trivial or one-dimensional. And that (supported by attractive presentation and easy controls) is what ultimately makes Crisis in the Kremlin a winner.

Mr Creosote:
Feel free to share anything about Crisis in the Kremlin (1992) here!
[Reply] 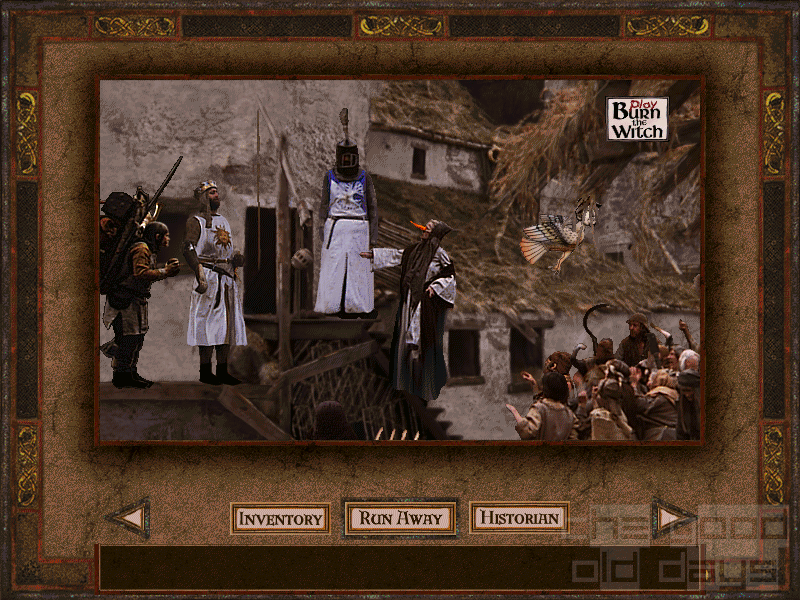