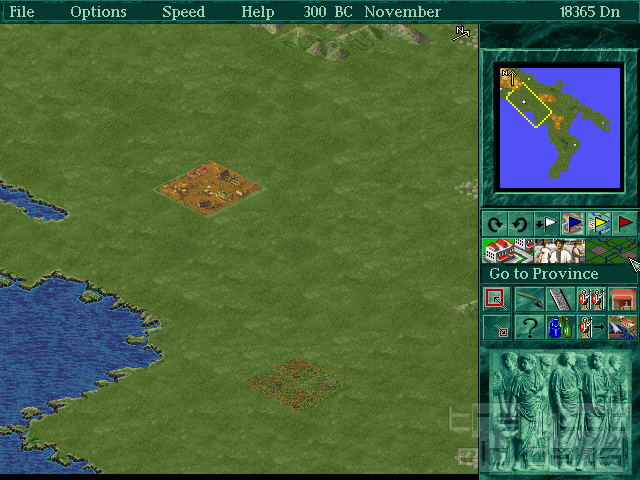 The sequel to Impressions‘ 1993 game Caesar, this Sierra title is the first in the City Builder Series to utilise the isometric view. Sporting a massive improvement visually and in terms of gameplay over the first game, it was also one of the relatively few games that could run natively in both MS-DOS and Windows 95.

The goal is simple. You are a governor of the Roman Empire. Your agenda is to rise so high in the current emperor’s favour that he chooses you to succeed him as the leader of the greatest empire on Earth. You also have a rival, controlled by the computer, who vies with you for Caesar’s favour.

Of course, this being the age of the Roman Empire, when marauding barbarians and invading armies were regular occurrences, eventually you will have to defend your city, and to do so, you will have to prepare your armies and crush the impudent mongrels who would dare assault the glory of the Roman Empire. In fact, in several missions it is one of the requirements for victory.

You will also occasionally receive requests from the ruling emperor, which you have to fulfil in a timely manner, lest you suffer his displeasure.

Should you succeed, you will become the powerful man on Earth, in a game that is quite rightly regarded as one of the finest in the series.