Laura Bow in the Dagger of Amon Ra
for PC 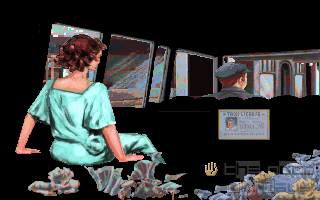 “Buy it, or we'll have to kill you.” So went the ads for the second and final game from Sierra On-Line to feature super sleuth Laura Bow. The Dagger of Amon Ra is a complex, mysterious and often humorous murder mystery set in the Big Apple during the roaring 20's.

Fresh out of school, Miss Bow lands a job at a prestigious metropolitan newspaper, courtesy of her father having an “in” with the boss. For her first assignment, Laura must investigate the theft of the priceless Dagger of Amon Ra from the Leyendecker Museum by attending a fundraising party. The dagger's discovery and placement in the museum having generated much controversy means that suspects are everywhere. It isn't long before one of the guests is murdered, leading to a night locked in the museum with a killer on the loose and bodies piling up.

Though ostensibly a sequel to The Colonel's Bequest, and occasionally referred to as Laura Bow II, no knowledge of the previous game is required to enjoy this one. Though similar in tone and style to its predecessor, The Dagger of Amon Ra features 256-color VGA graphics and a mouse-driven interface (plus digitized speech for those who own the MPC release). The hand-painted backdrops are a sight to behold, evoking the art deco style of the period, and the musical score perfectly sets the mood for each scene.

Laura has more of a personality in this installment than she did previously, reacting and commenting on many more situations than in the first game. The colorful cast of 1920s archetypes populating the museum are all extremely memorable, and all make viable suspects, meaning you'll need to be thorough in questioning them and examining evidence in order to deduce the killer's identity. Though this is another instance of Sierra primarily using their staff members to provide voices for the MPC version, most acquit themselves very well. Leslie Wilson's turn as the narrator, Laura and Yvette is most impressive; you'll be hard pressed to realize it's the same actress voicing all three.

This is not a game you can expect to bang out in just a few hours, not if you intend to be thorough and gather as much evidence as you can. You'll need to take your time and talk to everybody about everything, look at all there is to look at (both with the naked eye and with your trusty magnifying glass), and make detailed notes on your own about all you learn in order to piece the puzzle together. You see, The Dagger of Amon Ra doesn't come right out and tell you exactly who the killer is at the end, as you're supposed to have figured it out by yourself. Four different endings can be reached, the best one depending on you having figured out the mystery behind both the theft and the murders, and you'll only be able to do that through patient, methodical play.

One of Sierra's most unique, stylized and intriguing titles, The Dagger of Amon Ra has a lot going for it for both mystery fans and point-and-click adventure fans. Though it'll likely take several playthroughs to experience all it has to offer, it's well worth a look.

Laura Bow starts her career as a reporter with a big case, the robbery of the dagger of Amon Ra, which has recently disappeared from the Leyendecker museum. But things take an unexpected twist when she finds herself trapped in the museum at the same time an unknown murderers starts a killing spree.

After this you may think the game is about solving these crimes. But in an interesting turn, actually this is secondary, in the sense that you can finish the game and have no idea of what is going around.

Not that it’s easy to ignore all the clues, but as long as you keep going and manage to survive, you can finish the game achieving little in what concerns the actual crimes.

But that is boring, if you are playing what you want is to solve this crime. And it will be a bit of a challenge, as you will have to gather objects and gossips all around, while characters move around, have secret meetings and hide their secrets from you.

And to make it all harder, keep goofing around and time will pass, making it impossible to get some of the clues or talk to some of the suspects. Quite unforgiving, as per usual on Sierra games.

Luckily not as unforgiving as usual, mostly because random deaths have been reduced to a minimum, still you can get killed just for crossing the road, or, my favorite, touching a rat trap, but usually they are not as unexpected as they are in other games.

I suppose the murders already take much of the dark humor. Each of them is done in such an exaggerated way that you wonder if the killer feels like he has an artistic side or just wants to show off.

Talking to NPCs, just as finding the important clues, is completely optional most of the time. And it’s handled in a simple, but somewhat ingenious, way. You can just talk, and Laura Bow will say whatever she feels like, getting a usually useless answer, or you may ask about one of the topics on your notebook.

Those topics are things like places somebody mentioned, objects you have or people you met. Noting how the characters react to these topics can be a source of hints about what’s going on, but still this dialogue system which is well used on RPGs feels too simplistic for an adventure game.

In the end this is a fun game, maybe my dislike for Sierra games makes it look better than usual, you may say it’s better than what I expect of Sierra games. Still keeps some of their faults, and near the end there are plenty of places where you can get stuck in an cheap way, but I like the idea of making the actual meat of the game a secondary part of it, which ends, of course, with you helping to solve the crime giving all the information a good amateur detective should have collected.

So try the game and pay attention to what is going on, because at the end you will get a test. 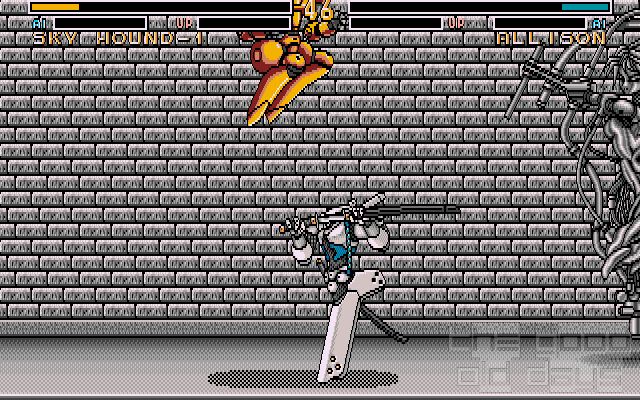