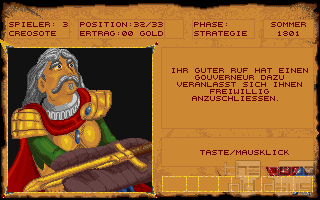 Conquestador is really one of those games which show how much the game industry has changed. Even in 1992, which was still pretty much a transitional period, it might have been considered old-fashioned. Twenty years later, it's almost become a relic which nobody who has not played games since at least the 80s will be willing to touch. I'll try to explain why you get over your bias and still should.

Let's talk about what makes it so 'outdated' first. The strategy genre of computer games initially emerged from board games. That traditional genre is usually played in a turn-based fashion and activity is governed by strict rules which define what can and cannot be done. Over the decades, computer game developers took more and more advantage of the freedom technology gave them. Although in fact, most games retained their strict rule corsets, they got pushed into the background; hidden beneath the surface. At some point, hardly any game would still dare tell a player that he cannot do this or that due to 'the rules' – there had to be some sort of 'in-game reason' for something to be impossible (even if many of these stated explanations were actually just a cover made up after the fact to cover for some arbitrary rule). 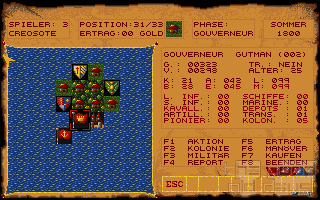 This development made sense, because the more static gameplay of board games and the restrictions by the rules were usually made out of limitations. The goal had always been to come as close to reality as possible. Or so the general assumption went. Chances are, it was correct in the vast majority of cases.

What the one-sided proposition of this argument ultimately meant, though, was, that one quality which had actually appealed to quite a few players was gradually lost: The abstracted analytical quality of strictly regulated games can be understood and optimised on a mathematical level. This, in itself, can be an interesting challenge. Why else would people play chess or checkers?

Even in the realm of highly abstract board-game likes, Conquestador is a curious one. From the starting point of classic board games, it went off in the opposite direction compared to the rest of the world: It uses the resources of the computer environment to make the explicit rules more complex than would be feasible in an actual board game. Or at least it would be a nice complex one with tons of manual record keeping (which a computer can do so much better for you).

Obviously, the goal of the game is to travel into uncharted waters, discover new lands and colonise them. The conquistadors, i.e. leader figures, play a central part in this. There are three types of them: Admirals sail the seven seas, not only discovering land to settle on, but also transporting all the other people. Governours build and administrate cities. Finally, Generals are responsible for defensive and offensive military operations. 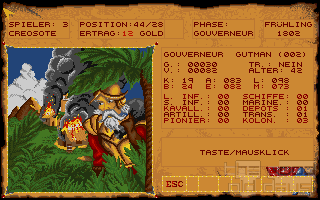 The strict rules of gameplay become apparent in the phases model. Each turn belongs to a special phase and the actions the player can take are different in each. So, for example, in one phase, you can hire new conquistadors and plan your other global spendings. After that, an intricate system of initiative calculations determines the order in which the conquistadors have their turns. The conquistadors can be equipped with gold (which trickles away at every turn), supplies and, depending on their type, settlers or soldiers to accompany them for whatever purpose the player intends to use them. So, at some point, you will hit land, claim it for yourself (while the other players try to do the same), develop your newly formed colonies and, at some later point, reap the benefits by importing goods back into your homeland.

Of course, this barely scratches the surface of all the options present in the game. It definitely expects you to study the manual in detail before you can even make the first steps (which only reinforces the old-school impression). The initial learning curve is extremely steep – be prepared for some frustrating hours in which you will fail repeatedly; sometimes even without knowing the reason for your failure. Be assured, though that the final complexity is still quite manageable, though.

The art in designing such abstract game rules is finding the right balance so that things become neither too simple, nor too complicated and so that no player can 'hack' the rules. The latter meaning that there should be no non-obvious loopholes which can be abused. Out-of-world actions which would be stupid in the world should never result in an advantage. Unfortunately, it is hard to achieve such an airtight ruleset. This is where Conquestador shines. The game encourages fair play within its own set boundaries both in positive and negative ways. The gameplay tickles the mathematician's urge to analyse the system for optimisation, almost like chess does. And that is what got lost when everything became 'realistic'!

Moebius:
Feel free to share anything about Conquestador (1992) here!
[Reply] 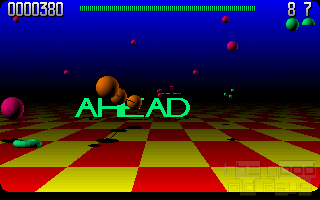