The Test is Now READY
for Interpreter (Z-Code) 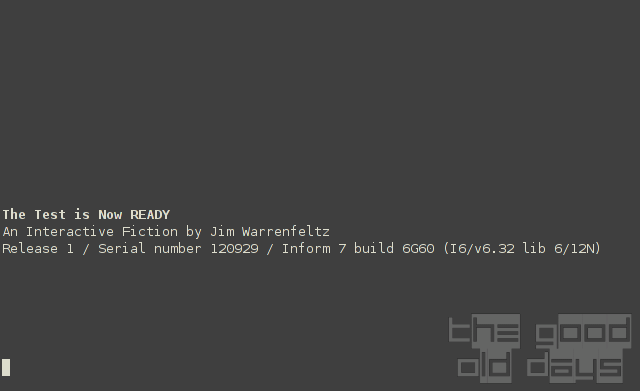 The basic questions of morality will never be answered definitely to everyone's satisfaction. In spite of countless generations having discussed them to death, when push comes to shove, humans still mostly react based on instinct, and that is probably even good, because all too often, the result of too much contemplation is total self-inflicted impotence, i.e. it prevents any action. The Test is Now READY is a morality piece which attempts to force the player to make tough decisions for which there are no 'right' answers. It presents five situations, each of which gets right down to its core dilemma.

The effectivity and therefore success of these situations differs quite a bit, though. The initial one is set in a zombie apocalypse and the question asked is if the player will sacrifice herself to (temporarily) save another survivor or act selfishly and kill the other person for her own survival. However, this almost comical intro – which does a very good job of providing breathless chase thrills – is hardly the way to set the tone for a game which wants to be taken seriously.

The fifth and last scenario has got even less impact: It is supposed to recreate the experiments usually conducted with apes which give them the opportunity to consume drugs with the push of a button. It usually ends with them starving to death, because they do nothing but push that button anymore. Not only, putting the player in the ape's role, is this not a moral dilemma (unlike the others), but there is an inherent failure in communicating the situation so that it could become an actually hard choice. Pushing the button, the game only responds “You feel a great sense of joy”. This is one of the basic problems of storytelling, though: Telling a spectator/reader/player that something is one way or the other will not make her feel it. This could be solved by giving the player some incentive to actually feel the dilemma. For example, each pressing of the button could trigger a small self-contained adventure (which could be actually 'adventurous'). So you want to play this funny little (but hallucinary) game? Go ahead, I dare you!

Although the other scenarios work better than this, similar criticism could be applied to them, too: The game is very terse, which makes it hard for any real emotional involvement to develop. It definitely works quite well in the scene which asks the player to torture a suspected terrorist in order to extract information about his plans (and the final line of that scenario actually made my skin crawl in its brutal honesty). But on the whole, the impression of an artificially constructed simulation/test never goes away. An actual test which wants to find out about the real psyche of a player would have to immerse her much more, make her forget that this is just a game. Unless the instincts take over, the player reactions will always be what she wants to be rather than what she is.

That said, it is not a bad idea and the offered interpretations of the player choices are interesting. Actually involving a player to the point where it would work in practice would be asking too much for sure, but some more steps into that direction would have been nice.

Mr Creosote:
Feel free to share anything about The Test is Now READY (2012) here!
[Reply]