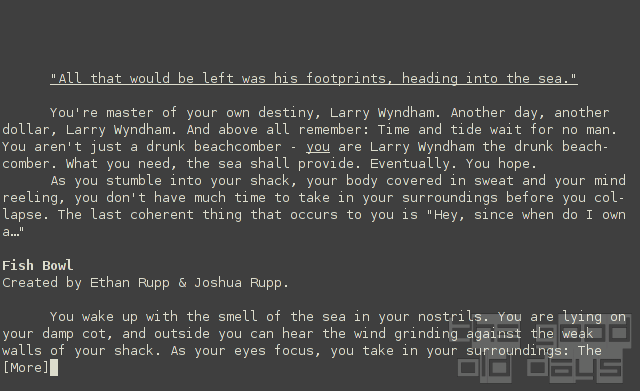 One of several debut games of this IF Comp which basically contain a good story, but which devaluate it due to unnecessary technical and also storytelling-related shortcomings. The beachcomber Larry Wyndham awakes from a drunken stupor in his shack and he discovers a fish bowl on his dresser. His thoughts wander towards this glass bowl, because he cannot fathom how it got there. Further seemingly realistic, but in the context of the story surreal occurences, which are described in a convincing language recalling Edgar Allen Poe in places, help to get through the game.

It seems quite troublesome to to comply to the authors imagination and in this process to bury cats, hunt after a message in a bottle or carry a dead fish which comes back to life in the empty bowl around. These elements only make sense in hindsight, because in the end, nothing is as it seems. The game turns into an alien/zombie horror show and the surreal elements' meaning turn out to be a transmorphed obfuscation.

The plot is basically good, but the dramaturgy of the storytelling isn't. At this point, the game tips over and eloquently leads the player to its conclusion. Since this is a transformation of the protagonist, it would have been better to develop it as one. The way it is, you're playing a surreal story which only has an unexpected ending and which only hints at things being not quite as it seems before its final twist.

Technical deficiencies push the game almost beyond the motivation threshold. Casual gamers will not be able to reach the conclusion. For example, the standard parser message 'That noun did not make sense in this context' (adapted by the author) is one of most printed lines, many of the objects mentioned in the location descriptions are unknown to the game. The joke of committing an action repeatedly before it finally works also gets old really fast. Nevertheless, the story is good enough on the whole. Language-wise, it is above average, but the arc of suspense and the playability could do with some reworking. For a debut game, I think this game is remarkable!

Fish Bowl claims to be An Interactive Horror. Yet, the introductory text makes it seem like an absurdist comedy. Preparing for the worst, I brace myself… I find out I'm playing a 'drunk beachcomber'. There is no immediate goal to the game, except maybe to find out how this fish bowl came into my possession. Exploring the immediate surroundings, it does not really matter much anymore suddenly as I'm drawn into a consciously surreal adventure of self-recognition.

The surface actions the player takes, like burying a dead cat, filling the eponymous fish bowl and reviving a dead fish in it or trying to grab a bottle with a message inside are all meant to be highly symbolic. The message in a bottle is slipping through my fingers… hmm, I really wonder what that means? All this is accompanied by small, teasing hints about something deeper going on here. Which are then resolved in a short second scene/day which makes things more explicit by replacing (or 'reinterpreting') all the previous objects as something else. Which, given the build-up, as short as it may have been, is not really such a big reveal anymore.

This kind of surreal horror has been tried before and Fish Bowl certainly is not the definitive seen-all-end-all masterpiece. The plot idea is serviceable and sometimes, knowing fewer specifics can definitely be creepier than the opposite. Yet, exploring the motifs a little deeper certainly would not have hurt, either.

More importantly, though, it is the implementation which gets in the way at times. Exits are unlisted. Some objects are only mentioned once and then never again. Parser disambiguation produces unintended and sometimes hilariously clunky effects (standing on the beach, wading into the ocean, the noun 'water' will still refer to an empty bucket rather than the obvious choice). Obviously synonymous actions are not implemented ('sleep' does not work, while lying down on the bed produces the intended effect). None of that intended for reasons of surrealism – it just makes the player's life unnecessarily hard.

That said, Fish Bowl is technically solid enough to enjoy the little trip into the subconscious it offers. Well done – work on the implementation details a bit more next time, and you'll have a really good game! 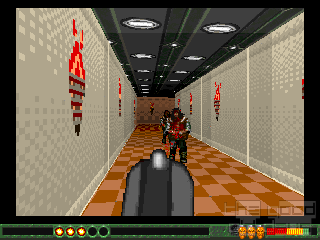