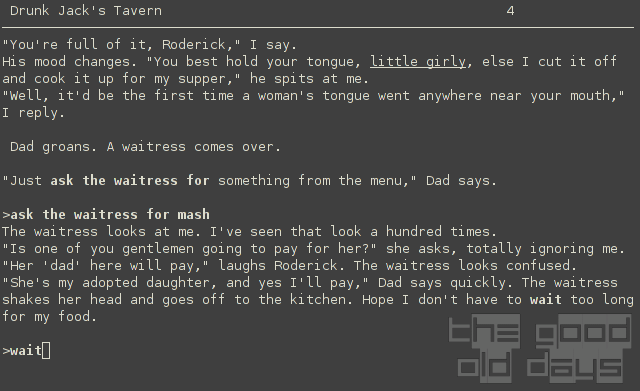 J'dal is one of those games you seemingly may want to drop on your trash icon during the beginning. You have no real option to act besides some conversation with strange NPCs, explore some thingies, order a steak from a dumb waitress or read about a toilet door you never can open. This seems to be intended to introduce players to interactive fiction in a technically ragged and fairly linear way, giving some background, a little atmosphere, and the shape of the quest. Besides, the first steps don't seem to have any meaning.

But aside of those library messages often shown (sometimes not even this, but nothing), there was some mood that encouraged me to struggle through the game. Aside of the bad implementation I liked how the shabbiness of the tavern grew slowly through exploration and conversation in the intro part. There's a »fucking loogie« in the steak served by the dumb waitress and one of my favorite descriptions is the sink in our room 203 that I have to share with my dad: »It's kind of like a sink for pissing in. It's in an alcove but it still makes the whole room stink. Dad said that it probably drains straight down to the beer taps in the bar.« It's a really good descripton of the situation and in this way you steadily get an idea of where and who you are and what you have to do.

It's an easy quest, that dad describes pretty well: »We'll go down the old mine, get the artifact, get out, and get the money for it. Then we'll be set for a while.« So I'm not just a young black girl among white dad and two strange friends, but poor. Dad »adopted me from the street, you could say. Felt sorry for me or something.« I like this way of short and easy descriptions, giving some impressions around the story, and I like also such contrasts like young and old, black and white, that promises some impact within the story. There are some more potential contrasts later like dark and light or weak and strong, but they're not really part of the story and thus just nice. I was also pleased about some fantasy puzzles in the mine as opening the chain, fighting against the »beart« creature or the way to get the artifact, but they distressed me due to the bad implementation. At the end I had to consult the walkthrough and even that seems to be fragmentary.

In technical points, J'dal is a bad game, but with some narrative foundation to be a good one. The puzzles well-implemented would have the capability to be good and the story well-told, too. I can't really recommend the comp version of the game because I got tired of its flaws, but on the other hand, in parts it wasn't boring. In any case, the author seems to have the capability to write good stories.

You know what – let's ignore the technical level after this one sentence: This game is very buggy, even game mechanics central to the game don't work as they should most of the time. This is obvious and it needs no further analysis. Let's instead focus on what the author intended the game to be and measure the success of the applied storytelling and gameplay techniques. Unfortunately, the conclusion will still be that this is not a worthwhile game, but at least on this level, it is worth examining in a little more detail.

J'Dal, the protagonist, is a sixteen-year-old girl who happens to be black. The latter fact is shoved into the player's face right away at the very beginning of the game from several angles at one. Why is this even important? Because it's the reason she's discriminated against. In case this is supposed to be some serious statement about racial discrimination, let me tell you that this is not how it works. If you want to raise a topical, relevant societal issue and you want it to matter, let me discover it in the game in some natural way; as if by accident. What makes this even stranger is that the plot immediately drops into standard D&D realms: J'Dal is part of a cliché group of cliché adventurers who is supposed to retrieve some legendary artifact from a cave. A strange foundation to base a discussion of serious issues on.

Then, let's talk about gameplay and player involvement. The author tries to cater for new players by making the opening scene into a kind of tutorial. Each step is explicitly spelt out to the player who just has to repeat the input the game gave him. While this might be a noble goal, it is not only extremely boring to 'play' a game completely on rails, but it also communicates some wrong impressions. The former, because the game does not allow any free experimentation aside from the tutorial-defined inputs at all – everything else is simply rejected by the parser in this phase. The latter, because there is no gradual transition from this extreme handholding to leaving the player very much alone with tasks which are not only complex, but also quite illogical. So, the game actually achieves the opposite of its intention: Instead of guiding new players into the genre, it annoys, frustrates and alienates all imaginable groups.

This tutorial-like structure is also problematic from a storytelling point of view. Because the player is immediately and quite brutally taught that entering any commands apart from the ones given by the game in bold print is useless, he will hardly be tempted to stray from that pattern. However, the author actually dropped an expository meeting between the protagonist's comrades into the middle of this scene. Here, the player is supposed to learn about the forthcoming mission and get an impression of the characters which will accompany the protagonist. The game only gives the unsuspecting player three turns to ask questions (while waiting for a waitress to serve dinner). Then, the game already spouts the next command towards the player. While it is technically possible to explore those conversational options in more detail, none but veteran players will 'resist' the flow given by the game to do that. So, most players will end up with minimal – or even no – information about what's going to happen the next day (when the game begins properly). Which then turns that mission into kind of a mess gameplay-wise.

It is also a problem for characterisation, though. Since the initial interaction with the group is minimal, it's hard to even remember people's names or supposed abilities, let alone learn anything about their personality. Not that there is all that much to learn and understand about these people anyway. Which turns the fate of one of the guys into more of a head-scratcher than a real thrill. And believe it or not: 'black and discriminated against' is not a proper characterisation for a protagonist! I need more to care about a character and her problems.

That's it, then. Although J'Dal does attempt to do some interesting things, it fails at its own ambition all over the board. Not just concerning its implementation. Oh, crap, I didn't want to mention it again! 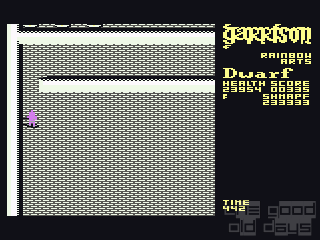