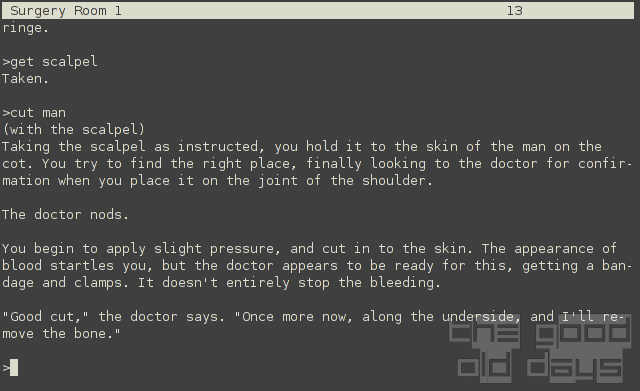 Body Bargain is an extremely disgusting game. Which is the highest praise I could possibly give it, because it is a game about revulsion. And it is not subtle about it. Set in an unspecified, but probably near future, it revolves around a pair of young sisters in the clutches of a plastic surgeon whose own body is his business card: He has become more cyborg than man. His services range from similar cases of replacement of individual limbs with artificial replacements or complete body replacements, ranging from metallic, as in his own case, to more naturalistic looks.

The latter being what those two sisters opted for. Although they are only in their early twenties, they both consider their bodies used up. Savannah, the older one, in the literal sense: She has tortured hers until scars have become her smallest problem. Rain, who takes over the role of the protagonist, is another classic case: She's plagued by weight problems. Although when the game begins, she has already put her operation behind herself. Her new body is exactly what she has always hoped it would be.

This is where the player, in his dual role as not just Rain's compatriot, but also as observer who is still ignorant of the described background, begins to have his doubts already: How could this have worked so smoothly and with such convincing results? He will learn soon enough, because neither Rain, nor Savannah could actually pay for their full body replacements, so they struck a deal with the doctor. In exchange for their own operations, they will work off their debt by assisting him in his clinic. Which, in gameplay terms, means that the game puts the player through a series of painful and very bloody operations in which the player becomes an active accomplice and which are described in a graphic way which is hard to stomach.

What is actually never explained is how much Rain knew about the doctor's methods before. The game does not make it clear at all what her own reactions are. Which gives the narrative voice a strangely clinical (sorry…) tone. Though this also leaves much of the interpretation up to the player and therefore leaves the decisions up to him as well.

This freedom to shape the story is both the game's strongest side and its biggest weakness. Body Bargain does an excellent job of communicating to the player that there might be more things to try than simply following the directions given by the doctor: In the obvious path, many locations and objects remain unused, clearly teasing the player to experiment and discover different endings. Some possible directions to go in are also communicated well enough: Try to prevent some of the suffering, try to escape, try to save your sister (who is still lying on the operation table)… The game's architecture in this respect is perfectly successful, because it does encourage and lead the player to experiment in such ways.

However, actually achieving any of these different endings (all of which are interesting and logical in their final consequence) has to be considered unfeasible. Not because the strategy to achieve them is be too obscure; quite on the contrary. It is only a matter of wording. While all other aspects of the game are completely convincing, this is where it fails in an extreme way which is almost unbelievable given the high quality of the rest of the implementation. There is a computer terminal which can technically be interacted with, but guessing the right verb to do so is impossible. Other crucial objects are hidden behind actions which are not clued in the slightest bit and which go against any imaginable convention of the genre. What can I say? Unbelievable how such a good game can suddenly turn into a frustration fest! Play it, by all means, it is a fascinatingly nasty experience; be advised, though, not too waste too much time actually trying to solve it by yourself, but to drop to the walkthrough quickly. As stupid as this might sound.